IMF economics put recovery at risk (not to mention people)

Latin America: Return to the IMF or reinforce alternatives? 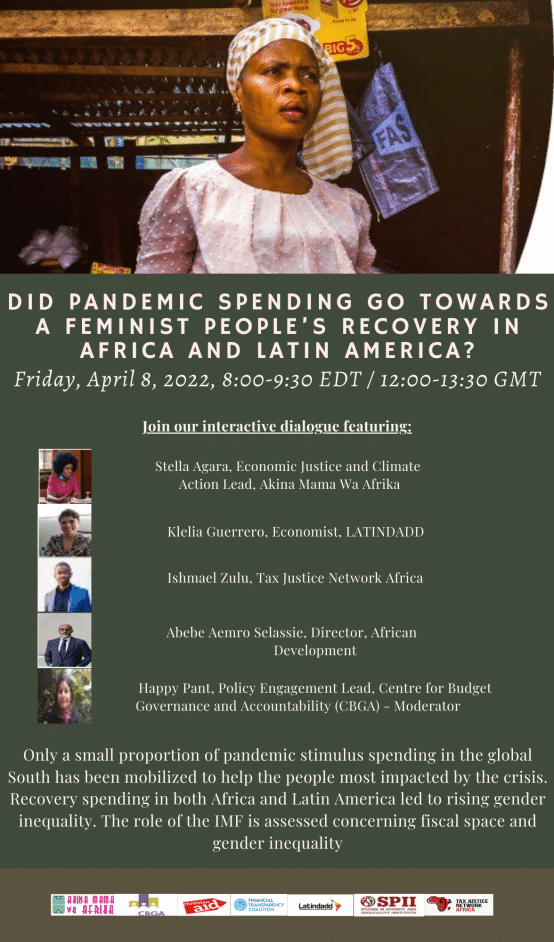 Summary: Only a small proportion of pandemic stimulus spending in the global south has been mobilised to help people most impacted by the crisis. Recovery spending in both Africa and Latin America led to rising gender inequality. The role of the IMF is assessed concerning fiscal space and gender inequality.

A video recording of the event can be found here.

Happy: Ishmael, can you take us through the findings of recent Fiscal Response report?

Ishmael:  *Presenting* Tracking Fiscal Responses to Covid-19 in Africa. Figures from IMF show that six countries in Africa as being in debt distress, and further 15 at high risk of debt distress. This is concerning for those with limited fiscal capacity; they cannot provide adequate social protection and healthcare. Example: South Sudan has one of the weakest healthcare systems in the world. The study focused on 9 countries spread across Africa.

Study hired consultants based in-country and took money raised to spend on Covid-19 and grouped it according to social protection, corporate stimulus, SMEs and informal sector. Corporate stimulus contributed to 63% of spending, social protection was only 21%, and less than 2% went to formal support. In Uganda they provided $2bn to provide bank support. Informal sectors constitute the backbone of African economy. The report provided some recommendations on this.

Stella: *On experience of needs of women in pandemic times*. We must take note that the majority of emergency response plans were geared towards corporate stimulus and were accessed by macro businesses. Many small business run by women, young people etc did not have access to recovery funds and so shut down. Part of funding to bank restructuring loans did not give relief to those who needed it. Only 21% of funds went to social welfare. All countries in study reported saw increased gender-based violence.

Unpaid care work: increased 100 fold and was majorly carried out by women during pandemic. The work went unrewarded. Certain products could not reach the African continent and this caused worry for women as they could not access basic commodities. The policy reforms taking place and how we recover has not included the gender perspectives or thought about how we make sure in future that we do not subject women to the same stress again.

What can we do moving forward? Ensuring that, as we work on policies for recovery, we centre the gendered experience of women and other minoritized groups in planning. This involves injecting funds to these groups of society. We must buffer family from soft issues. The problem of care work is global. The pandemic is an opportunity to rethink the education and healthcare systems. We need funding to fulfill basic needs. The current model of development refuses to measure factors like wellness etc. We must rethink concept of growth, GDP, and how we share resources.

1) Our global study found recovery funding was heavily skewed towards private sector: it provided loans and tax concessions, all these benefits added up to more than what was spent on social protections. Do you agree there was a balance of spending? What could be done to address this?

2) Early in the pandemic, the Fund encouraged states to increase spending then began to hint at austerity measures which could cause developing countries to fail. What kind of advice did you provide to them?

Abebe: These questions are directed to governments, decisions are made by them. We don’t disavow our role as a stakeholder, but fundamentally, what happened varied based on each country and depends on centrality and how resources are allocated: there are deeply political processes at play. On the first question, what are we talking about when we discuss recovery funding – outside resources, direct spending on gov budgets, or overall liabilities? We must understand what we are talking about in terms of total recovery spend. Secondly, what happens in recession is that business activity slows and companies start losing money so it matters how you pass spending. When companies are losing money, you will see that increase of budget deficits and therefore lower revenues. We must ask which resources governments had policy discretion over. Are we including those they didn’t have discretion over? I can’t give a solid answer on this without seeing the numbers of the reports.

To answer the second question, this was a once in a 100 year crisis and the health toll was limited in African countries because they shut borders etc and African states took agency. The economic toll on the region was awful. Our governments did not have the ability to cushion these effects as elsewhere. In 2020, we saw fiscal deficit in advanced economies widen by 9% points of GDP and only 3% points of GDP. IMF was aggressive in providing resources early on. Aggregate amounts to Sub Saharan Africa: we dispersed about $26bn since 2020, above this was the SDR allocation $23bn.

We also provided debt relief. Why? Because governments would not be able to cushion the effects of pandemic on their population. As important was our policy engagement, advocacy and transparency. We were loud about tilting spending towards social protection. We were cognizant that the pandemic would affect the informal sector and women so we advised spending on this. We tried to reduce debt burdens with DSSI, common framework etcetera to ensure financing was available by delaying tax payments. Kristalina was quick to say “spend the money but keep the receipts”. We asked the governments to provide audits on how resources were being used, contracts awarded were to be published, and to identify official ownership.

Lastly, I strongly agree with Stella that we must think about a new development model. We make the case for support on a daily basis by international community to countries. As someone who has worked in government, I want to state that we as governments have a lot of agency. A new development model must stress that a social contract is the key. But we often ask to strengthen certain areas of spending without explaining how it would be funded. We ask them to spend more and then say they are borrowing too much. The alternative is taxes: bringing to parliament tax measures means politicians push back and the public refuses to pay more tax. So how can it be paid for? Governments must explain how money is being spent and ask public for more willingness to pay taxes.

Klelia: ‘Towards a People’s Feminist Recovery’. We know that empowerment is key to breaking the cycle, but Latin America is the region with the most inequality. We are thinking of economic, political, emotional and physical opportunities. In terms of economic empowerment, how do we measure this? There is no follow up on what happens next when girls are educated – are we translating this progress into better salaries, is there real gender equality progress for gender equality opportunity. We have tripled the amount of time women are doing unpaid work. In public positions, we have many women working, but those with decision-making power are men. We also have climate risks, higher taxes etcetera which are a difficult and more pressing reality for women.

Most interventions don’t respond to the needs of women. It is not about help, it is about recognition. Thinking about Small and Medium Enterprises directed by women. There was a food supply programme in Ecuador, women were to collect the food but the timings did not match with women’s domestic activities. I respectfully disagree with Mr Abebe; it is time for us to try something new and adjust what we implement. In terms of stakeholders, we as civil society do not have much of a say, but we can still ask for conditions to influence public services and investments so that there is a legal requirement for these things to work for us.

Happy: Women have left the labour force for the informal economy and suffered during collapse. Did the IMF give specific advice to reflect this gender imbalance and could it have done more? The IMF advice to some countries has been to adopt fiscal consolidation and we know the risks of this approach: should these countries be forced to choose between meeting debt payments and responding to the post-Covid crisis?

Abebe: I have to plead ignorance on Latin American context so I will speak on the African context. For the past seven or eight years we have tried to be cognizant of all forms of inequality. This is reflected in our policy. Initially our thinking was questioning what was needed to address gender inequality and find ways that we can work to remove barriers to women’s economic participation, open bank accounts and ensure women have the ability to have land in their title. We realised this wasn’t sufficient to address gender inequality. We had to think of consequences of budget formulation and how it affects women’s welfare. We’ve been doing work on gender budgeting. We mainly have macro economists but we are building expertise and now have a special advisor on gender, but also have been partnering with entities like UN Women, having workshops etcetera.

On the second question regarding the shift to austerity, it was the right thing to do to widen fiscal deficits during 2020. We had to protect people in the emergency, which is why we provided so much financing (about thirteen times what we normally do). The question is, can these measures be sustained over the medium term, it’s the right thing to do that government collect more taxes? Policy makers are constrained. We provide cheap, close to zero interest financing. The question is for governments, what do you do? The only solution is to tax more.

Happy: You said 2020 IMF included widening of fiscal deficit, but this was very soon reversed.

Abebe: This was automatic.

Abebe: Countries have not been capturing return enough, that’s why debt has been going up. Going forward, we need to spend more.

IMF economics put recovery at risk (not to mention people)

Latin America: Return to the IMF or reinforce alternatives?