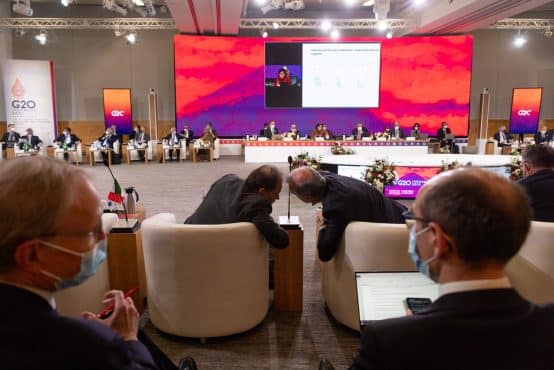 The Group of Twenty  (G20) is an informal forum in which the world's major economies discuss global financial and development issues. The G20 is made up of 19 countries and the European Union. The 19 countries are Argentina, Australia, Brazil, Canada, China, Germany, France, India, Indonesia, Italy, Japan, Mexico, Russia, Saudi Arabia, South Africa, South Korea, Turkey, the United Kingdom and the United States. Indonesia currently holds the Presidency of the G20, as of 31 October, which is annually rotated amongst its members.

The G20 meeting of finance ministers and central bank governors during the 2022 Spring Meetings of the World Bank and the IMF was disrupted by a walkout from Western governments in protest of Russia’s participation, following its invasion of Ukraine, with no communiqué agreed. Indonesian Finance Minister Sri Mulyani and Bank of Indonesia Governor Perry Warjiyo spoke on behalf of G20 members at a press briefing on 20 April, following the meeting.

The tone of the G20 press briefing was one of defiance in the face of political distraction, with Mulyani and Warjiyo aiming to strike a balance between recognising the challenging circumstances in which the meeting took place while acknowledging that the global economic situation is growing more volatile. They prioritised reaffirming the G20 membership’s commitment to addressing the issues of rising food and fuel prices, welcomed the creation of the Resilience and Sustainability Trust, and highlighted plans for a new pandemic preparedness initiative. See here for the G20’s overview of its press briefing.

Like this year’s Spring Meetings more generally, the G20 meeting was side-tracked by Russia’s invasion of Ukraine, which displaced the possibility of progress on other key issues (see Dispatch Springs 2022). As Russian officials began to speak, US Treasury Secretary Janet Yellen and British and Canadian officials walked out of the meeting, with other delegates joining, or switching off their screens, as reported by Reuters. This came after French Finance Minister Bruno Le Maire suggested Russian officials should not attend, stating, “war is not compatible with international cooperation.”

Reflecting on the division, IMF Managing Director Kristalina Georgieva called for “cooperation” during such challenging times, while a former deputy director of the IMF, Mohamed El-Erian, used the moment to reignite longstanding questions over the G20’s purpose as a decision-making forum, stating that, “the G20 is too divided, and lacks continuity…[and] gets very little done.” Despite this, Mulyani repeated the need for a commitment to multilateralism at the G20 press briefing, noting that, “All members are highlighting the need for us to continue to maintain G20 cooperation and the importance of multilateralism…it is important for the global economy.”

Rising costs all round

Political tension amongst leaders aside, the G20 focused on the spillover effects of the ongoing war in Ukraine on the global economy, particularly for low- and middle-income countries already suffering the economic hangover of the Covid-19 pandemic. Warjiyo cited rising inflation and prices of food, fuel and fertilisers as causes for concern. Limited fiscal space and high debt vulnerability were confirmed as major issues for developing and vulnerable economies. A press release summarising the meeting noted that G20 members expressed concerns about rising rates of inflation, which will see a tightening of global liquidity.

Those who followed the 2021 Annual Meetings no doubt experienced a degree of deja vu upon hearing this statement, with civil society activists on debt previously arguing that the G20’s action on debt relief was inadequate (see Dispatch Annuals 2021). Members reportedly raised concerns over the slow implementation of the G20’s Common Framework, with the G20 press release noting that, “The G20 also discussed progress on the implementation of the G20 Common Framework on Debt Treatment and called for the next steps to be more timely, orderly and predictable”, which many feel is a frustratingly insufficient update on the progress of this initiative. There had previously been disappointment that lack of private creditor participation in such schemes (see Dispatch Annuals 2021) and this year there seemed to be little movement on that issue.

The G20’s press release also confirmed that the forum will “continue the process of IMF governance reform through the 16th General Review of Quota no later than 15 December 2023,” echoing the Group of 24’s calls for progress on this process (see Dispatch Springs 2022).

The press release also announced that the G20 had agreed to establish “a new financial mechanism dedicated to addressing the financing gap for pandemic preparedness, prevention and action.” The release added that, “A Financial Intermediary Fund (FIF) housed at the World Bank is the most effective option” for this. This followed the World Bank and World Health Organization conducting a global needs assessment. Further governance arrangements for the mechanism will be finalised before the G20 health ministerial-level meeting in June.

Mulyani and Warjiyo were sure to convey the importance to G20 members of the role of the private sector in economic recovery for low- and middle-income countries, citing tightening fiscal space as a key motivator to encourage private sector development. Many will be disappointed to see this belief being reinforced, after civil society aimed to shine a light on the dangers of privatising healthcare during the Spring Meetings Civil Society Policy Forum (see Dispatch Springs 2022).

G20 welcomes the creation of RST

On the topic of sustainable finance, another notable policy focus reported by ministers was the establishment of the IMF-based Resilience and Sustainability Trust (RST) on the eve of the Spring Meetings (see Dispatch Springs 2022). It was confirmed that G20 members were supportive of the new IMF initiative. Warjiyo stated at the press briefing that members agreed “that the financing and technology side should be practical, inclusive, science-based and forward-looking” and the RST will align its approach with a green and inclusive recovery.

The G20’s press release also reaffirmed the bloc’s previous commitment to re-allocate $100 billion in IMF Special Drawing Rights via the RST and other channels. However, there was no meaningful engagement with civil society criticism of the RST’s design, which will require countries to undertake conditions in order to access finance and to have another IMF programme already in place, potentially limiting the RST’s impact (see Observer Spring 2022).

Further promoting the sustainable finance agenda, the press release underlined that G20 members agreed sustainable finance is critical for the recovery of a “green, resilient and inclusive global economy and the achievement of the 2030 Agenda for Sustainable Development.” G20 members discussed commitments reached in February to ensure the implementation of the G20 Sustainable Finance Roadmap which included “developing a voluntary and non-binding framework for transition finance, increasing the credibility of financial institution commitments, and developing policy tools to enhance sustainable financial instruments with a focus on improving accessibility and affordability”. Those following the Bank and Fund’s commitments to address climate change at this year’s Spring Meetings will hope to see concrete outcomes of this commitment in the coming months, after the World Bank’s disappointing engagements at COP26 (see Observer Winter 2021).