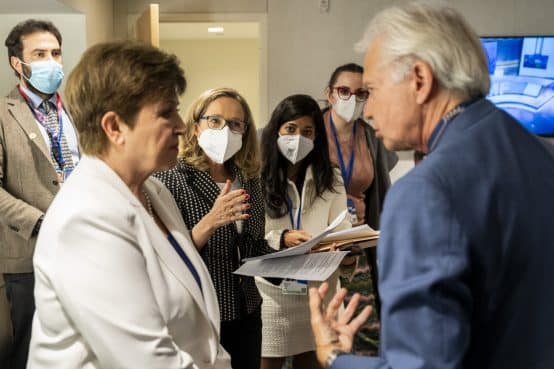 The 45th meeting of the International Monetary and Financial Committee (IMFC) during the World Bank and IMF Spring Meetings issued a Chair Statement instead of a communiqué, due to lack of consensus, on 21 April. The IMFC is the direction-setting body of finance ministers and central bank directors for the IMF. The communiqué of the IMFC usually sets out the consensus position about the direction of the Fund and key reforms. Individual ministerial statements to the IMFC, often revealing the true differences of opinion amongst the IMF’s membership, are also made available online. The next IMFC meeting is expected to be held on 13 October 2022.

The geopolitical tensions that led to similar rifts during the G20 and Development Committee meetings, both of which equally failed to produce a consensus document, also permeated the IMFC at this year’s Spring Meetings, as reported by Reuters. The failed last-minute scramble to pull the communiqué together against Russia’s opposition to language condemning their invasion of Ukraine led to a half-hour delay of the subsequent press briefing. Committee chair Nadia Calviño made no secret of who was to blame, emphasising repeatedly that “one member country broke away” and that the chair statement represented the unanimous consensus of all others.

The statement began with a preamble calling for a peaceful solution to Russia’s war against Ukraine, highlighting the UN General Assembly resolution “Aggression against Ukraine” from 2 March and the “massive humanitarian consequences and detrimental repercussions for the global economy” resulting from the war. Calls for “strengthened multilateralism to prevent fragmentation” that pervade the document echoed those made by IMF Managing Director Kristalina Georgieva in her opening speech and subsequent press briefings, indicating a real concern about global polarisation and its impact on the functioning of international institutions like the IMF. Yet, the IMFC said little of substance about IMF governance and quota reform (see Inside the Institutions, World Bank and IMF decision making and governance) – potential avenues to give a stronger voice to underrepresented countries, get rid of the undemocratic and neo-colonial gentleman’s agreement (see Inside the Institutions, What is the ‘gentleman’s agreement’?), and imbue the IMF and World Bank with somewhat greater legitimacy in the eyes of the world (see Observer Summer 2019). Indeed, although it later called for greater gender diversity on the Executive Board, the relevant paragraph on country representation was an exact copy of the language from the previous communiqué (see Dispatch Annuals 2021), reaffirming the “commitment to a strong, quota-based, and adequately resourced IMF at the center of the global financial safety net,” and to “revisiting the adequacy of quotas” by December 2023. Calls from the G24 for a third African board chair and protection of shares for low-income countries were left uncommented (see Dispatch Springs 2022).

The opening paragraph reads like a laundry list of crises: “The resulting surge [from the war against Ukraine] in energy and food prices has added to inflationary pressures, while supply disruptions have further intensified, and financial markets and capital flows are exhibiting increased volatility. Against the background of unprecedented uncertainties, rising interest rates, and record high global debt, the spill overs through commodity markets, trade, and financial channels could exacerbate existing vulnerabilities. Potential risks of debt distress, together with refugee flows, increased food insecurity, and inequality could add to social pressures. At the same time, climate change, together with other shared challenges—such as energy security, affordability, and sustainability—are becoming more pressing and require urgent attention.”

Global reverberations of food price shocks resulting from the Russian invasion were high on the agenda of the Spring Meetings, with African countries like Somalia and Benin sourcing 100% of their wheat imports from the warring countries. While the IMFC “welcomes the Managing Director’s call for urgent action on food security” and intends to work with donors to “avert a food crisis by supporting the most vulnerable countries”, little ink was spilled on longer-term food security strategies. No connection was made to increased droughts resulting from climate change, and the already unfurling hunger crisis across West, Central and East Africa.

Subsequent affirmation of “well-targeted support for vulnerable groups…while preserving long-term fiscal sustainability” demonstrated the disconnect of the pursued solutions from the scale of the challenges. Targeted social security measures while pursuing fiscal consolidation will be a drop in the bucket for countries having lost their entire wheat imports and with vaccination rates still far too low – a problem the IMFC intends to tackle through “boosting local production of vaccines” and removing “relevant supply and financing constraints” (see Observer Summer 2018). Talks of the extremely belated vaccine intellectual property waiver from earlier this month were not reflected in the document.

While the statement highlighted the extreme levels of debt as one of the many challenges, not much was offered in terms of solutions, which was mostly limited to “strengthening debt transparency practices” by both public and private debtors and creditors, calling for a replenishment of the Catastrophe Containment and Relief Trust, and “welcome[ing] the G20’s commitment to step up efforts to implement the Common Framework for debt treatment” (see Observer Winter 2021). The latter, it became clear in the press briefing, was mainly China’s joining of the creditor committee for Zambia – far from the comprehensive debt workout mechanism championed by civil society (see Observer Spring 2022).

Assertions that central banks will “continue to appropriately calibrate the pace of monetary policy tightening…while being mindful to safeguard the recovery and limit negative cross-country spillovers” left open to interpretation how the foreseeable impacts on dollar-dominated debt in the Global South would be mitigated in practice. While the statement hailed support to Ukraine through a Multi-Donor Administered Account, the statement remained silent on the Fund’s harmful and counterproductive surcharges policy that is forcing Ukraine to pay tens of millions of dollars to the IMF each month in unnecessary extra charges (see Observer Spring 2022).

Recognition of need for IMF to step up in its mandate, but not bold enough

Climate change was clearly a core issue on the agenda and repeatedly highlighted. The statement welcomed the new IMF climate strategy (see Observer Autumn 2021) and reiterated “strong commitment to further accelerate climate action in line with the Paris Agreement…including enhanced action on adaptation and resilience” and a “timely, smooth, and just transitions to net zero”. The group asserts that it will “utilize policy mixes based on all effective tools, ranging from fiscal, market, and regulatory actions” in this effort. The establishment of the Resilience and Sustainability Trust (RST, see Observer Spring 2022) was welcomed and an initial SDR commitment of $40 billion announced at the IMFC press conference, with the noted absence of any contribution from the US, the largest shareholder. The fact that neither the input from civil society nor from climate-vulnerable countries was sought for the RST’s design, resulting in a loan-based instrument contingent on an existing IMF programme and conditionalities, was unsurprisingly left unmentioned (see Dispatch Springs 2022).

The chair statement also supported “the IMF stepping up work…in the new strategies on climate, on digital money…fragile and conflict-affected states…mainstreaming of gender issues, and enhanced engagement on policy issues affecting inequality.” Given the widening gap of an unequal pandemic recovery and large-scale impacts on gender inequality, this step-up is more than timely, although the unequal allocation of resources – with little budget dedicated to the Fund’s upcoming gender strategy implementation, including adequate ex ante distributional and human rights impact assessments – leaves one wondering about the sincerity of such efforts (see Observer Spring 2022). The statement “welcome(d) the IMF’s recently completed Review of the Institutional View on capital flows”, which was long overdue, but CSOs and academics have argued does not go far enough (see Observer Spring 2022).