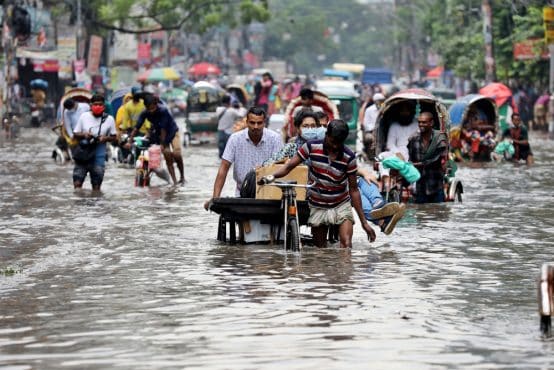 Formed in 2015, the V20 Group of Finance Ministers is a dedicated cooperation initiative of economies systematically vulnerable to climate change. It is currently chaired by the People’s Republic of Bangladesh. The V20 membership stands at 55 economies representing 1.4 billion people. The V20 Group of Finance Ministers adopted its Spring Meetings communiqué on 21 April, following a virtual meeting.

The communiqué for the V20 Group of Finance Ministers issued during the World Bank and IMF’s 2022 Spring Meetings highlighted the multitude of crises facing climate-vulnerable developing countries. The document stressed that the continuing challenges posed by the Covid-19 pandemic and unequally felt climate change impacts are now being exacerbated by the spillover effects on the global economy of Russia’s invasion of Ukraine, including rising food and fuel prices. The communiqué noted with concern, “The ongoing impact and recovery pace of the COVID-19 pandemic, which could undermine climate action and trigger further instability in the world economy given the growing impacts of…a global energy price crisis driven by conflict in Ukraine.”

In this context, the communiqué highlighted that both climate change impacts and the volatility in commodities markets are further reducing the fiscal space of V20 countries, noting that, “growing contingent liabilities are due to worsening extreme weather events combined with increasingly volatile, expensive, unreliable fossil fuels [which] are further harming our ability to power our economies.”

The V20 also stated that – in light of these multiple challenges – their financing needs remain acute, and that the current international financial architecture is poorly suited to deal with the crises they face. The communiqué argued that, “The key concern is funding and liquidity to deal with crises of growing complexity,” adding that, “the liquidity crises that most of us are facing are not all of our own making. A global financial system unresponsive to climate change realities…[means] more developing countries are forced into situations of fiscal distress or default, not because of long-term insolvency, but due to a lack of cash on hand.”

The V20 was vocal that more equitable governance processes are needed in order to solve the grave problems that its membership currently faces.

The communiqué called on the G7 and G20 to enhance, “the inclusivity in decision-making processes” – echoing calls from the Group of 24, which highlighted the need for progress on the IMF’s 16th review of quotas (see Dispatch Springs 2022). The V20 called for the G7 and G20 to grant it observer status at their respective summits, and to support it in gaining official observer status at the IMF.

While the V20 welcomed the establishment of the IMF’s new Resilience and Sustainability Trust at the Spring Meetings – which was backed by $40 billion in commitments from 12 countries to ‘on-lend’ their IMF Special Drawing Rights to the Trust (Dispatch Springs 2022) – the V20 cautioned against the RST repeating the mistakes of structural adjustment, which required countries to undertake onerous conditionality in order to access financing. In reaction to the IMF’s board approving proposals to make RST financing contingent on countries undertaking ‘qualifying reforms’ (i.e., policy changes) and having another IMF programme already in place, the communiqué urged “consideration of…enhancing the impact of this Fund [the RST] through supporting further policy development where needed rather than through prohibitive conditionality.”

The V20 also highlighted the need for debt restructuring among its members in order to alleviate the debt distress in many V20 countries, noting it had proposed the Dhaka-Glasgow Declaration for Climate Resilient Debt Restructuring at COP26 in Glasgow in November (see Observer Winter 2021). The communiqué argued that, “Debt restructuring including debt-for-climate swaps must be accompanied with credit enhancement as a climate resilience tool safeguarding creditors’ assets and vulnerable economies while unlocking new climate resources and ambition.”

The V20 also welcomed, “the IMF’s public call to reinvigorate the G20 Common Framework for Debt Treatments and the IMF’s commitment to an instrument to link debt relief to climate action, as well as with financial cooperation guarantees to be made available for climate vulnerable economies in debt distress” (see Observer Winter 2020).

The V20 welcomed the IMF’s efforts to mainstream climate change into its operations (see Observer Autumn 2021), and urged the IMF to continue its efforts to “review and rethink its approach [to] “surveillance” of climate risks of all kinds in its Article IV surveillance activities with all countries, as well as to rethink and recalculate IMF debt limits to take into consideration climate change, and link debt flexibility and support to climate action along with guarantees to avoid liquidity crisis and cost of capital repricing. The Board of the IMF will be instrumental in establishing a fit-for-climate IMF.”

More broadly, the V20 reiterated its calls for a Loss and Damage fund to be created within the UN Framework Convention on Climate Change to help countries who are on the front lines of the climate crisis cope with its economic impacts, with the communiqué stating, “We seek finality on the matter of loss and damage and call on COP27 [due to take place in Egypt this November] to establish an international financing mechanism for climate change loss and damage in solidarity with victims least responsible for, and least equipped to withstand, the increasingly extreme shocks driven by climate change.”