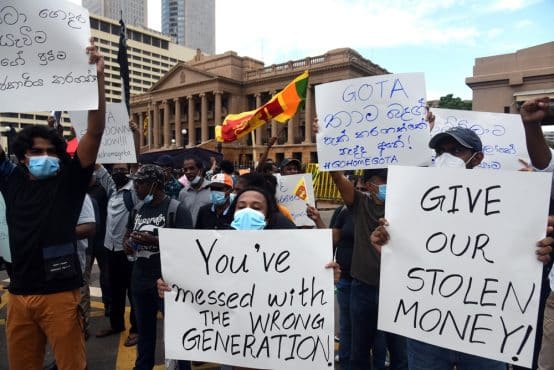 People gathering stage a protest in front of the Presidential Secretariat Office Colombo against the government of Sri Lanka in April. Credit: Ruwan Walpola/Shutterstock

A May report by UK-based civil society organisation Debt Justice (DJ), formerly Jubilee Debt Campaign, found that public spending in the most indebted countries is falling or stagnating, “despite the need for countries to increase their spending in response to the food and energy prices hikes” (see Observer Summer 2022).

Currently, the only international mechanism for debt relief to which countries have access is the G20 Common Framework for Debt Treatments (see Observer Winter 2020). This has proven ineffective as none of the three countries that have applied have had any debt cancelled and the involvement of private lenders in this scheme is still unclear, despite several calls from civil society organisations (CSOs) and leadership at both the IMF and World Bank (see Observer Winter 2021).

The prioritisation of debt payments in this context is generating social debt under an unequal recovery. Lower- and middle-income countries that are exposed to economic social and climate vulnerabilities need a debt cancellation – not just a postponement – and a fair debt restructuring process.Patricia Miranda, Latindadd

Tess Woolfenden of Debt Justice highlighted that given the lack of an effective debt relief scheme, “Lower-income countries are being forced to prioritise debt payments over public spending on healthcare or access to food, right at a time when spending is so urgently needed… Debt repayments to wealthy lenders should not take precedence over people’s needs in a time of multiple crises.”

Inequality crisis worsens in the absence of solutions to rising debt

Debt and human rights experts have raised concerns about continued IMF-mandated austerity, warning that the inequality crisis will be exacerbated by hikes in food and energy prices (see Observer Summer 2022) and the high level of external debt payments – which according to DJ is now as its highest since 2001.

A 2021 paper by Isabel Ortiz and Matthew Cummins warned of a “post-pandemic fiscal austerity shock…far more premature and severe than the one that followed the global financial crisis.” In a July 2021 blog, IMF Managing Director Kristalina Georgieva noted the Fund’s concerns about “a worsening two-track recovery, driven by dramatic differences in vaccine availability, infection rates, and the ability to provide policy support” and called for “urgent action by the G20 and policymakers across the globe.”

However, the IMF’s own promotion of austerity measures in highly indebted countries (see Observer Winter 2021), and other policies such as IMF surcharges (see Inside the Institutions, What are IMF Surcharges?; Observer Spring 2022), are forcing countries to prioritise paying back their debts over meeting their international human rights obligations.

Patricia Miranda of Peru-based CSO Latindadd, highlighted, “The prioritisation of debt payments in this context is generating social debt under an unequal recovery. Lower- and middle-income countries that are exposed to economic social and climate vulnerabilities need a debt cancellation – not just a postponement – and a fair debt restructuring process, to guarantee social protection, food, health and other crucial and urgent expenditures to prioritise life in a context of multiple crises, which are heavily affecting the poorest people in the south.”

In July, UN Secretary-General Antonio Guterres stressed the need for immediate debt relief for low-income countries. He also noted that, “efforts are also needed to create sovereign debt workout mechanisms that can significantly reduce the disproportionate burden placed on developing countries, while bringing all creditors to the table.”

Longstanding calls for a United Nations-based debt workout mechanism that guarantees responsible lending where all the actors, including the private sector, take part in line with international human rights norms (see Observer Spring 2022), remain pressing. The possibility of a 4th Financing for Development Conference (FfD4) could bring an opportunity to establish such a framework at the UN. As highlighted by the Civil Society Financing for Development Group, this mechanism would be key to “address unsustainable and illegitimate debt including through extensive debt cancellation” and move towards an economic system that “works for people and the planet.”

Sri Lanka recently witnessed the collapse of its economy, unilaterally suspending $25 billion of foreign debt payments. Mass protests since March due to high levels of debt, the impact of the Covid-19 pandemic and the rising costs of commodities led to the president’s resignation in July. Without urgent action taken to tackle the debt crisis, Sri Lanka is widely seen as a harbinger of more defaults by other countries to come.