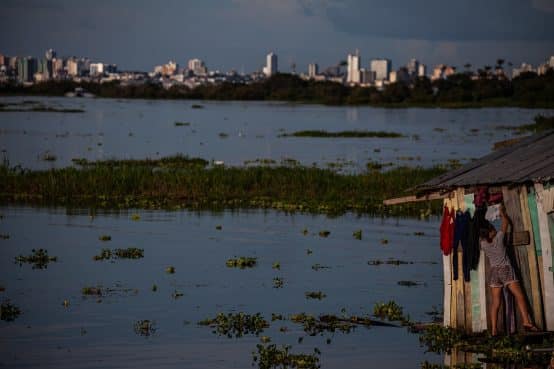 A young woman arranges clothes on the clothesline of her house, a floating one located on the banks of the Rio Negro on the edge of the village of Cacau Pirêra, in Iranduba, Amazonas, Brazil. Credit: IMF Photo/Raphael Alves

After a year-long civil society campaign calling on rich countries to re-channel their unused Special Drawing Rights (see Inside the Institutions, What are Special Drawing Rights (SDR)?) to poor countries struggling with Covid-19 pandemic response, climate shocks and growing debt burdens, in April the IMF established the Resilience and Sustainability Trust (RST; see Dispatch Springs 2022). As the IMF ventures into lending for long-term balance of payment challenges for the first time, the RST’s design remains flawed: Eligibility is tied to countries having an existing IMF programme; disbursement is via loan financing with a tiered interest structure, rather than grants; and a quota-based access limit means countries with small quotas or high levels of existing debt will hardly benefit (Observer Spring 2022). Moreover, the $45 billion funding aspiration seems staggeringly unambitious compared to the minimum $6 trillion of climate finance needs calculated by the UN Climate Change Conference (UNFCCC), especially given that G7 countries currently have $1 trillion in SDRs on their balance sheets.

The RST will also require countries to undertake yet-to-be-defined ‘qualifying reforms’ related to climate change or pandemic preparedness to access finance, with the IMF working with the World Bank to design these reforms. The April RST board paper emphasised that reforms would be identified by Fund and Bank staff, and national authorities’ strategies considered only “where applicable”, casting doubt on a truly country-led approach. Other sources of expertise like the UNFCCC or civil society remain unmentioned. The accompanying press release suggests “reforms supported by the Trust are also intended to catalyse increased financing from the private sector,” indicating an unwavering focus on a market-led transition.

Given the ubiquity of fiscal consolidation measures across almost all recent IMF loan programmes (Dispatch Springs 2022), as well as the contradictory approach of both institutions on climate and fossil fuel investment (Observer Winter 2021, Autumn 2021), the implications of the Fund and Bank assuming decision-making power over countries’ climate policies and related public spending needs are problematic. Indeed, in an April report, Chiara Mariotti from Brussels-based civil society organisation (CSO) Eurodad highlighted “serious risks that the RST will lock countries into multiple frameworks of conditionality and undermine their already limited policy space.”

It’s unclear how doubling down on the same approach is now expected to result in a different outcome on achieving climate goals, while also supporting countries’ development outcomes.Lara Merling, Boston University

Recognising the “macro-criticality” of the transition risks of the economic transformation away from fossil fuels, the IMF developed a climate strategy in 2021 that included proposals for a serious expansion of staff capacity (Observer Autumn 2021). However, research by ActionAid USA and the Bretton Woods Project published in August 2021 demonstrated that the Fund advised over half its members to continue investing in fossil fuels in the six years prior, including expanding fossil infrastructure, privatising energy and utility companies, and more. Mozambique is a case in point (see Observer Summer 2022, Autumn 2020), where the Fund predicted a coal and offshore gas boom and developed a regime of tax breaks for investors, only for the main coal mine to become a stranded asset, and the country’s flagship gas project to be halted over increased insecurity and violence. Mozambique’s debt has ballooned partly as a result, an outcome that a serious assessment of transition risks might have accounted for.

While the IMF can – in theory – play a crucial role in navigating the macroeconomic impacts of climate change and mitigation policies to support a just green transition, including through the RST, this will need a deep institutional shift beyond scaling-up climate staff and collaboration with the World Bank. “The current approach is a continuation of the type of policies that the IMF and World Bank have imposed since the era of Structural Adjustment Programs, which have for decades failed to deliver meaningful outcomes on development goals,” said Lara Merling of Boston University’s Global Development Policy Center. “It’s unclear how doubling down on the same approach is now expected to result in a different outcome on achieving climate goals, while also supporting countries’ development outcomes.”