Driving dispossession: The global push to “unlock the economic potential of land

Maimbo: Why World Bank is pushing against subsidies in E. Africa to deal with crises

The highest bidder takes it all: The World Bank’s scheme to privatize the commons

Africa and the making of adjustment 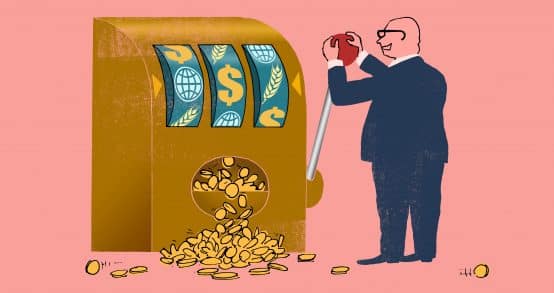 The world faces an acute food crisis, with food prices hitting all-time highs in March, according to the UN Food and Agriculture Organization, before receding in recent months.

Russia’s invasion of Ukraine has brought the issue into focus, as both countries are key producers of grain exports and agricultural fertilisers.

But while the Covid-19 pandemic and the conflict in Ukraine have exacerbated issues in global agriculture supply chains, food experts argue that the crisis is not rooted in a global food shortage, with current food production sufficient to feed the world’s population 1.5 times over – but rather in an increasingly unequal and financialised global food system.

[G]lobal corporations hold large reserves of grain, but do not publicly report them, nor is there a requirement for them to do so. This lack of transparency makes it impossible to get a clear view of global stores of grain, which contributes to further volatility.Professor Jennifer Clapp, vice-chair of the High Level Panel on Food Security and Nutrition

As Professor Jennifer Clapp, vice-chair of the High Level Panel on Food Security and Nutrition, argued in May on online platform Civil Eats, “The [current] excessive price rises and fluctuations… are not based on market fundamentals. In just nine days in March 2022, the price of wheat on futures markets jumped 54 percent.…Evidence suggests financial speculators are jumping into commodity investments and gambling on rising food prices.”

According to Professor Sergio Leite of Universidade Federal Rural Rio de Janeiro in Brazil, “the upward movement in prices begins in mid-2020 and is not only related to the pandemic and the war in Ukraine, but also to issues already related to the increase in production costs, to the debate on transition of the production model [i.e. the EU’s ‘farm to fork’ initiative],” and to commodity speculation. Leite added that the number of investment funds globally that are backed by agriculture grew from fewer than 50 in 2005 to more than 600 in 2020.

Despite this, an action plan to address food insecurity released by the World Bank, IMF and other international financial institutions (IFIs) in May failed to even mention financial speculation – and rather focused on (inter alia) promoting open trade, mitigating fertiliser shortages and supporting increased food production. The lack of acknowledgement by the IFIs of the role of the corporatisation of agriculture in the current crisis is concerning, as the Bretton Woods Institutions have played an important role in facilitating the financialisation of the sector over recent decades (see Observer Spring 2020, Spring 2018).

The action plan’s launch followed a declaration signed by over 280 civil society organisations in October, ahead of the 2021 Finance in Common Summit, which called, “for an immediate end to the financing of corporate agribusiness operations and speculative investments by public development banks,” and renewed focus on supporting “peoples’ efforts to build food sovereignty, realize the human right to food, protect and restore ecosystems, and address the climate emergency.”

Crisis in a time of plenty: Bank and Fund back free trade solutions

As Frederic Mousseau of the US-based Oakland Institute noted in a 30 May op-ed for Inter Press Service, “There is no food shortage. According to a May 6, 2022 report by the United Nations Food and Agriculture Organization (FAO), the world enjoys ‘a relatively comfortable supply level’ of cereals.”

Rather, the current crisis reflects power asymmetries in the global food system. Clapp argues that, “the production of the world’s staple crops destined for export is concentrated in a small number of countries, and they are shipped around the world by a handful of trading firms…Add to this concentrated global food system the financial markets, which can further exaggerate the effects of price shocks.” In fact, despite increasing global food outputs, the number of undernourished people, according to the World Health Organisation, has been steadily growing since 2015 after years of decline, reaching 811 million in 2020.

Rather than calling out financialised interests, however, both the World Bank and IMF have instead vocally opposed countries introducing trade restrictions. For example, the World Bank’s April 2022 Commodity Markets Outlook argued that, “Recently…policy responses have tended to favor trade restrictions, price controls, and subsidies, which are likely to exacerbate shortages.”

The IFIs’ action plan released in May likewise noted that, “The IMF is engaging its members and is working with the World Bank, the WTO, and others to promote open trade. The IMF’s trade policy tracker is monitoring trade restrictions on food and agricultural inputs and has…identified…20 countries that have resorted to such practices since the start of 2022.”

Mousseau noted the example of India, where both the US and IMF have sought to convince the country to lift a suspension of wheat exports. He argued, “Their cited concern is that export restrictions will exacerbate food shortages… But the argument does not stand ground technically or morally.” Moussueu added: “The US produces roughly 400 million tons of corn, but over 40 percent of this amount – 160 million tons – goes to ethanol production, while another 40 percent goes to animal feed, and only 10 percent is used as food whereas another 10 percent is exported. India was not expected to export more than 10 million tons of wheat in 2022-2023.”

As Flora Sorkin of the Society for International Development noted in an April 2020 At Issue briefing, “The World Bank and IMF have played a pivotal role in facilitating the financialisation trend [in agriculture] through their support for market-led land reforms and financial sector deregulations, which enabled private investors’ access to large-scale land deals in developing countries and further speculation over commodity futures” (see also Inside the Institutions, The World Bank and agriculture).

The Bank’s Enabling the Business of Agriculture rankings, which were discontinued as part of the wider Doing Business Report scandal in 2021 (see Observer Autumn 2021), included a land indicator aimed at promoting large-scale land acquisitions by foreign investors, according to 2019 research by the Oakland Institute. A 2020 report also by the Oakland Institute included six case studies where the World Bank was a key player in the large-scale dispossession of rural lands. This included in Ukraine, where, “the World Bank and the International Monetary Fund leveraged the economic fallout from the COVID-19 pandemic to coerce ‘Europe’s breadbasket’ into putting its agricultural land for sale in a land market” (see Observer Winter 2019).

Meanwhile, the World Bank is currently urging countries to resist introducing universal food subsidies in an apparent continuation of earlier, ill-fated Bank interventions during the period of ‘structural adjustment’, when food and agriculture subsidies were slashed under World Bank reforms (see Update 62). The World Bank’s director for development finance, Samuel Maibo, told the East African website in May that, “The World Bank position is that subsidies are effective if temporary or targeted. If you do not have these two working carefully, the risk of mismanaging subsidies is high.”

There is arguably a direct link between such policies and the continued concentration of power by a handful of global agricultural commodity traders. Clapp noted that just four companies, Archer-Daniels Midland, Bunge, Cargill and Dreyfus, control “the bulk of the world’s commercial grain trade…These global corporations hold large reserves of grain, but do not publicly report them, nor is there a requirement for them to do so. This lack of transparency makes it impossible to get a clear view of global stores of grain, which contributes to further volatility.”

As noted in Oxfam’s May 2022 Profiting from Pain report, recent years have seen an unprecedented boom for agriculture traders’ profits: In 2021, Cargill had a “net income of $5bn and made the biggest profit in its history….The company is expected to make record profits again in 2022.”

As part of its efforts to bolster production, the International Finance Corporation (IFC), the Bank’s private investment arm, is considering finance for these same players, including a recently approved $200 million loan to Dreyfus’s Brazilian subsidiary, which drew opposition from civil society over human rights and environmental concerns – as well as claims that the agricultural production supported will mainly be used for animal feed (see Observer Summer 2022). Such support appears part of IFC’s wider strategy, with the IFIs’ action plan noting IFC will “focus on facilitating financing to maintain trade flows of commodities from alternative origins and meeting increased working capital needs of its private sector clients along the supply chain…through financial intermediaries as well as by directly lending to agribusiness companies.”

Mousseau noted: “As hundreds of millions struggle to buy food, it is difficult to say what is the most shocking: The record profits made by a handful of multinational corporations that dominate the global food trade or the ‘keep trade open’ mantra repeated tirelessly by international financial institutions to sustain the business of these corporations and speculators gluttoning on world hunger.”

Driving dispossession: The global push to “unlock the economic potential of land

Maimbo: Why World Bank is pushing against subsidies in E. Africa to deal with crises

The highest bidder takes it all: The World Bank’s scheme to privatize the commons

Africa and the making of adjustment