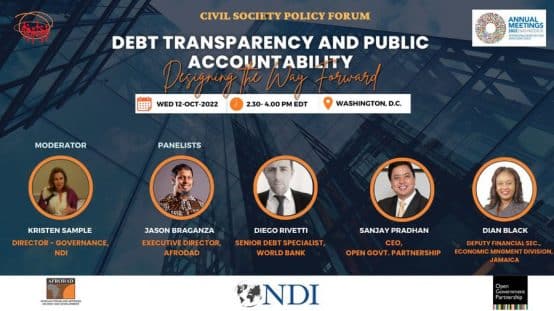 Unsustainable debt is the rule, not the exception in the Global South. Loans are generally not transparent, with little public sustainability or oversight. They have done work to increase public sustainability and insight at NDI, but this lack of transparency has huge effects on the public sector. It can foster corruption, funds are wasted or misused, and this can infringe on basic rights, and open the door for authoritarianism and instability in public policy.

Opaque and unsustainable debt is a complex challenge, and addressing it is not just up to the debtors, but also the creditors. Some have non-disclosure clauses that are pretty strict. How can we move on public accountability?

Why is debt transparency and accountability so limited?

The benefits of debt transparency are clear: it is easier to be accurate on debt sustainability, there will be an uncertainty spread on debt in markets if markets aren’t sure about size of the debt.

Mozambique: there is a conversation about debt sustainability and how it started there…

The lack of transparency internationally be instrumentalised because:

Markets could be fooled into giving a country a lower debt related risk premium;

It is difficult to disentangle intentional efforts from the unintentional – they are often linked.

There are several dimensions to this issue:

However, the rules of the game have not changed.

Where the burden of this dysfunction lies is critical. It is in creditors’ interest to know, as well as citizens of debtor countries. And why is debt so central to the development finance agenda? Should there be a separate focus on domestic resource mobilisation? There is a separate need in Africa, to appreciate the shortcomings in public debt contracting. The roles of civil society, citizens and judiciaries have not kept pace with how the situation has changed.

The key is the right to information. What is put up as collateral for opaque loans: infrastructure? Tax revenues? As debt servicing can be equivalent to public expenditure, this is critical.

There is also a paternalism on the part of those who have the information. The UK is pushing for years to get the export credit agency to reveal details of where they get their lending. They now do disclose this information. Bonds are seen as transparent, but that is for people in the markets with access to information. This is another form of paternalism; traders know, so they think access to this information isn’t important.

Kristen: Debt transparency is now important for multilaterals as well.

Debt transparency is a precondition for a debt sustainability analysis, and this is essential for a meaningful DSA. The DSA is important as a basis for lending policy and debt restructuring. It is a matter of gaining trust, the need to know how big the debt is before it can be assessed as a problem.

Debtors and creditors need to take time to reconcile their information. If a country has good data, this period (possibly 3 months+) can be achieved more quickly. There is also a reputational risk, restructuring countries need to be transparent. The data shared with the fund, etc, should also be shared with citizens. The restructuring process itself should be transparent, and all legal and financial aspects must be understood.

Jason:
The burden is on borrowers, but a responsibility should also be placed on the lenders. Creditors can get away with too much, “essentially what is almost theft”. Data that governments produce should be accessible to the IMF and World Bank, and this also gives signals on how debt instruments are designed. What need is there for confidentiality in public debt contracts in a developing country that impacts its citizens?

Afrodad has been working on the African Borrowing Charter for 8 or 9 years. It lays out how borrowing should be conducted, involving the central government, that can do DSA, etc. There should be a debt management policy as well, then the role of the Parliament in providing oversight should be considered. Public participation should also be included.

The Harare Declaration involved an understanding of how Africa has evolved in the international economy. The African continent should be at the table as rules are agreed. More countries are publishing their debt contracts online.

How can we avoid pitfalls we have seen in current debt crises? Transparency needs to be implemented, and not just for its own sake. Data should be public and usable, we need one place where we can all access the data, for borrowers and lenders to disclose loans. We need one source, and one standard. Existing standards are a scattergun approach and not necessarily coherent or followed.

Since 2019, there has been little real movement. But private lenders need clarity going forward as well. Possibly, for a contract to be enforceable, it needs to be transparent. If this standard is implemented in New York and London, it would change the game. Transparency needed to deal with debt crises, but it won’t change the reality of high debt levels and repayments in current crises. The scale of restructuring needed is vast and transparency alone won’t help.

Open government partnerships made collaboratively with citizen participation have the greatest effect on open government. The ultimate objective is to facilitate public conversations about debt.

Collaborative implementation of reforms with public-private partnerships, etc, are most effective. The public must be Included in audits and validating audits, in terms of the loans and the projects financed by these loans. The Argentine government has moved to increase transparency, as has Kenya.

What are the solutions? What kind of solutions should be prioritised now? Who should champion them?

The solutions depend on the objective. Transparency and accountability is important in the process of debt contraction, but this is separate from current debt crises and difficult decisions. In the process of debt contraction, we need to audit these processes in Africa. Traditionally this has been done with Ministries of Finance, but we can expand that now, expand the capacities of Parliaments to understand the creditor landscape, asking questions about the creditors governments are engaging with.

Making publicly published contracts enforceable is a possible solution, a white list of creditors who don’t do these things.

Road maps for debt restructuring support initiatives to get creditors to release their data. Among reporting countries, there are still gaps and room for improvement. What can the World Bank and IMF do?

Information is often not comprehensive. The Bank provided a lot more of a breakdown at  the beginning of the pandemic, but still more information is not made public. We need a single, usable database. There needs to be way of helping people use information that is available, and force creditors and debtors to disclose it.

There are open Parliament plans for debt, eg. Georgia, to increase Parliamentary oversight of public debt. So Parliamentarians are more informed on Georgia’s debt processes, an OPG action plan, and committed to publishing data on their open data website. Also committing to increasing citizen participation in capital development projects, esp in monitoring.

Governments need to be able to effectively negotiate debts, and they need the capacity to do so effectively.

Inertia is not the difficulty, the main reason for govt bodies not publishing accurate stats.

If people aren’t obliged to report, they won’t report. This is true for creditors as well as debtors, we need a public debt registry. Citizens and Parliamentarians need to understand that data. An example of this is Spain, which does debt audits.

There are international accounting and statistical standards, but they are not enforceable.  Countries can define what is included in the public debt. Reporting to the IMF and World Bank is all voluntary. We need to move away from a voluntary system.

Zambia has a CSO debt alliance, the Centre for Trade Policy and Development is leading at the moment. But there is no monopoly of knowledge within civil society organisations.

There is widespread acceptance Sri Lanka kept paying it’s debt for too long, so it depleted its reserves, and now the IMF is Sri Lanka’s last option. The IMF and Sri Lanka’s DSA and conditionalities will only be released after it is all negotiated. What will the size of the public surplus need to be? The IMF should make this all public as part of its engagement with local civil society.

The IMF can’t lend to a country with unsustainable debt unless there is a restructuring. If debt is defaulted then the IMF can then make a loan, and that gives Sri Lanka the power to force its creditors to accept a better deal for them, rather than accepting a weak deal.