The promise and anxiety of G20’s financial multilateralism 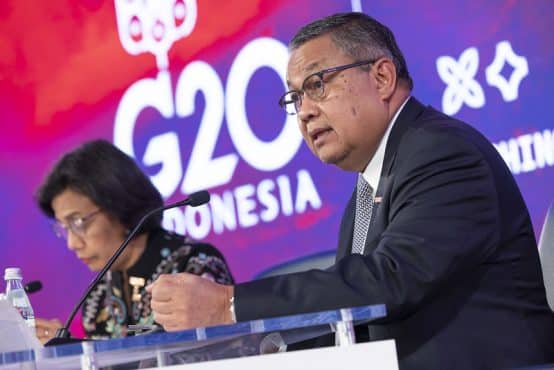 Minister of Finance of Indonesia Sri Mulyani Indrawati and Governor of the Bank of Indonesia Perry Warjiyo speak during a G20 press briefing during the 2022 Annual Meetings at the International Monetary Fund. Credit: IMF Photo/Alison Shelley

The Group of Twenty (G20) is an informal forum in which the world's major economies discuss global financial and development issues. The G20 is made up of 19 countries and the European Union. The 19 countries are Argentina, Australia, Brazil, Canada, China, Germany, France, India, Indonesia, Italy, Japan, Mexico, Russia, Saudi Arabia, South Africa, South Korea, Turkey, the United Kingdom, and the United States. Since December 1st, 2021, Indonesia holds the Presidency of the G20, which is annually rotated amongst its members.

The G20 meeting of finance ministers and central bank governors during the World Bank and IMF Annual Meetings 2022 failed to produce a joint statement for the second consecutive time, after the group’s inability to agree on a common statement after the Spring Meetings (see Dispatch Springs 2022). Serious disagreements over Russia’s war against Ukraine, oil production and price cap made a consensus impossible, though the official press release did reaffirm their joint commitment “to solve the heightened global economic challenges and focus on tangible progress.”

The G20 meeting agenda was dominated by discussions about inflation, the food and energy crisis, and the conflict in Ukraine. However, the group fell short of delivering the strong leadership and collective action required to tackle the current global poly-crisis. Sri Mulyani Indrawati, the Finance Minister of Indonesia, the country holding the G20 presidency this year, acknowledged during the press briefing that the G20 faced “many challenges” and “differences in view”, with “escalating geopolitical conflicts worsening the economic situation.” Still, she remained confident the “G20 wants to strengthen coordination and harmonising action” on issues of common interest.

The meeting deepened the cracks in multilateralism exposed by the war against Ukraine. While Western nations responded with unprecedented sanctions on Russia, other countries have maintained economic ties with Moscow, India and China stepping up their purchases of Russian oil. US-Saudi relations are under serious strain, with Washington criticising the decision of Saudi- and Russian-led OPEC+ group of oil exporters to cut oil production – a move that could raise energy prices even higher, as the G7 attempts to impose a price cap on Russian oil exports, a move aimed at stripping the country of a major source of funding for its war effort.

The lack of consensus within the group also comes ahead of the G20 Summit in November and the United Nations’ COP27 Climate Summit in Egypt in the same month. Despite the stalemate that blocked collaboration, Indrawati did state that all member countries found it crucial “to continue to preserve this G20 as the premier economic forum for cooperation.”

On 19 October, the Elders, an independent group of former global leaders, issued a statement critical of the divisions that have hamstrung the G20, calling on the group “to do their job: to rise above their differences and find consensus on the leadership needed to tackle the inter-connected crises facing humanity.”

Stabilising the international financial architecture: the gap between rhetoric and action

Indrawati also expressed a renewed commitment of the G20 group towards “progressing the financial sector regulation and supervision, strengthening the resilience of the international financial architecture and establishing a financial safety net” through implementation of the Common Debt Framework beyond the Debt Service Suspension Initiative (DSSI), the allocation of Special Drawing Rights (SDRs), and the strengthening of Multilateral Development Banks’ capital adequacy framework to “achieve sustainable and inclusive growth” (see Observer Spring 2022).

There is, however, a noticeable gap between rhetoric and action. In the case of Chad, one of the few countries seeking debt restructuring under the G20 Common Framework (see Dispatch Annuals 2020), the IMF managing director expressed confidence that debt restructuring could be completed by the end of the year, but progress has been glacial. On 13 October, the creditor committee for Chad, composed of G20 members China, France, India and Saudi Arabia, stated that the African country did not need debt relief at the moment given the surge in oil prices, committing  to reconvene if a financing gap was identified. Chad’s finance and budget minister Tahir Hamid Nguilin said he regretted the decision not to provide debt relief now, given Chad’s current challenges including the food crisis, floods and a political transition. The outcome of the G20 Creditor Committee puts Chad in a trade-off between debt and climate goals where the country is effectively forced to continue extracting natural resources to be able to pay back its debt.

Unfortunately, this is not an isolated case of inadequate attempts to build financial resilience through instruments of debt restructuring and reallocation of SDRs. The IMF has been struggling to operationalise the Resilience and Sustainability Trust (RST), the fund’s first-ever facility to reallocate SDRs and provide long-term funding to help members deal with structural challenges (see Observer Spring 2022), due in part to donor state legislation involved in the reallocation. The IMF’s Executive Board approved the establishment of the RST in April 2022 and ahead of the Annuals, Managing Director Kristalina Georgieva expressed confidence in obtaining over $40 bn in contributions. However, during Annuals she announced that only $20 billion in contributions had been made available by G20 member states Australia, Canada, China, Germany, Japan and Spain. Further financial support is expected to be available in early 2023, over 1.5 years after the allocation of SDRs to help countries cope with the pandemic. States in the Global North have also dragged their feet in regard to the promised $100 billion annual financing for climate transition, the implementation of which has also been characterized by underfunding and a lack of transparency and accountability (see Observer Spring 2022).

No reform of the flawed global financial architecture on the horizon

During the G20 press briefing, Perry Warjiyo, the Governor of the Bank of Indonesia stated that “the G20 will continue progressing the discussion” on revising the IMF quota formula, an important step toward addressing the serious structural challenges the global economy currently faces (see Observer Autumn 2022). The G24 group of developing countries, which shares some membership with the G20, has already issued a joint statement during Annuals calling for the quota formula to be revised by “increasing the weight of the GDP blend” and “shifting quota resources from advanced countries to emerging markets and developing economies to reflect their growing weight in the global economy” while “protecting the shares of the PRGT-eligible members”. This indicates the gulf in ambitions between advanced economies and emerging markets for the upcoming quota review (see Observer Autumn 2022). The last quota increase, which took effect in 2016 after a five-year delay in the ratification of the 14th Quota Review by the United States Congress, doubled the IMF’s quota resources with only minor changes in its voting and quota structures, but was based on economic data from 2008, reflecting economic realities that are now out of date.

The promise and anxiety of G20’s financial multilateralism