Annual Meetings 2022 Wrap Up: As the world runs out of time, BWIs fail to provide clear vision and bold actions 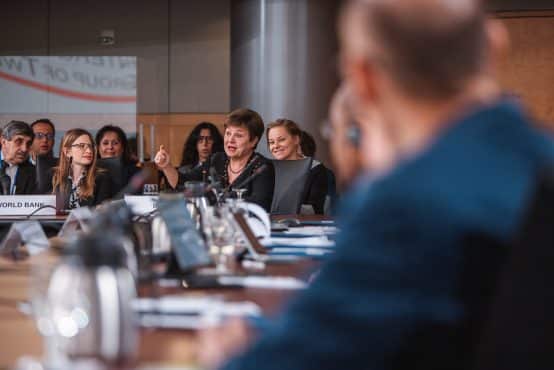 The G24 is a grouping of some of the most influential developing country members of the World Bank and IMF. It includes G20 countries such as India, Argentina, Brazil, Mexico and South Africa, as well as low-income countries with less influence over the institutions. The G24 communiqué is traditionally the first statement of the IMF and World Bank Annual Meetings. This year, the G24 ministers met in Washington DC on 11 October.

The communiqué of the Intergovernmental Group of Twenty-Four on International Monetary Affairs and Development (G24) for the 2022 International Monetary Fund (IMF) and World Bank Annual Meetings, released on 11 October, focused on the “severely darkened the global economic outlook and development prospects” worsening on many fronts since the G24’s last meeting in April, and called for an intensifying of support across the board. The group urged an increase in action amongst international financial institutions (IFIs), in order to cushion the ongoing and increasingly harsh effects of global economic, political and humanitarian turmoil, particularly against low income countries and emerging markets and developing economies (EDMEs).

With a heavy focus on bleak economic conditions across the globe present throughout the Annual Meetings, the IMF lowered its growth forecast for 2023. The communiqué noted that “Global growth is slowing, and poverty, hunger, water scarcity, cost of living pressures and food and energy insecurity have increased alarmingly,” which is combined with high inflation and spikes in food and energy prices. As a lender of last resort, much of the spotlight was  on the IMF. The communiqué stressed that central banks should coordinate inflation responses to avoid adverse economic spill overs on EMDEs, noting the need for “rapid monetary policy tightening” in order to ensure capital outflows and currency depreciations jeopardising financial stability and debt sustainability are avoided.

Adding to the chorus of ongoing discussion on IFI governance (see Observer, Autumn 2022), the communiqué called on the IMF to ensure “timely completion” of the 16th General Review of Quotas (QRG) by December 2023. They stressed that the review should include the “long-delayed realignment of IMF members’ quota shares”, last undertaken in 2008, and that the IMF should offer a revised quota formula that further shifts quota resources from advanced countries to EMDEs to reflect their growing weight in the global economy as part of its outcomes, while protecting the shares of low income countries. The group also called for a third Sub-Saharan African ED to be added to the IMF board. Similar language was used in the G24’s 2021 Annual Meetings communiqué, thus highlighting the sustained demand for acknowledgement of such requests by the Fund (see Dispatch Annuals 2021).

Another key topic of the Annual Meetings was IMF surcharges, the removal of which has been called for by civil society as a form of relieving the burden of countries in severe debt distress (see Inside the Institutions, What are IMF surcharges?; Observer Spring 2022) The communiqué described the IMF’s surcharge policy as “regressive and procyclical”; undoubtedly the critical language civil society activists and debt-distressed countries would like to see in order to spur the IMF into action (see Observer Winter 2021). Further to this, the group encouraged the IMF to review its sources of revenues (consisting mainly of income from lending, which includes surcharges) and assess the appropriate burden sharing among IMF’s members in providing a Global Financial Safety Net (GFSN), which is a global public good. Further, on the topic of addressing debt, the communiqué highlighted the importance of including private creditors as accountable actors in providing debt treatments and encouraged indebted countries to  “mobilise private finance”.

After the IMF’s Resilience and Sustainability Trust was made operational at the Annual Meetings, using rechannelled IMF Special Drawing Rights (see Dispatch Annuals 2022), the G24 noted its support for an ‘expanding’ of the trust, to “cover other structural challenges affecting EMDCs beyond addressing pandemic and climate change responses.” Though no detail was given on the types of structural challenges countries will face, a recent report by Isabel Ortiz and Matthew Cummins noted that 85 percent of the world’s population will live in the grip of austerity measures by 2023. The group stressed the need for continued spending, calling for “policy reforms with significant public investments in human development, sustainable infrastructure, climate change mitigation and adaptation for a just transition, and social protection.”

On the ongoing food crisis, the communiqué noted that a “strong and coordinated multilateral support to tackle the food and energy crises is urgently required.” The group approved various initiatives including the World Bank’s Global Crisis Response Package to address drivers and impact of food insecurity, the establishment of the Financial Intermediary Fund for Pandemic Prevention, Preparedness and Response, and the Food Shock Window in the IMF’s emergency lending instruments. However, there was a clear call for further action. The group called for the World Trade Organisation (WTO) to “further address longstanding subsidies and import restrictions by advanced countries that have constrained agricultural production and exports from many developing countries.”

On climate change, the G24 echoed calls from the 2022 United Nations General Assembly for developed countries and Multilateral Development Bank (MDBs) to provide financing for “mitigation, adaptation, as well as loss and damage to support developing countries that emitted the least Green House Gasses leading to climate change but are now disproportionately bearing heavy losses from extreme climate related events,” and stressed that “ensuring just, orderly, and inclusive transitions require developed countries to contribute financing that matches their largest share of historical and current global GHG emissions.” Such statements will be welcomed by civil society as climate reparations are increasingly demanded, particularly in the context of devastated countries such as Pakistan (see Observer Autumn 2022).

Despite the clear message from the G24 group that existing Bank and Fund measures pale in comparison to the magnitude of global problems, the BWIs maintained a largely self-congratulatory tone throughout the meetings, opting to respond to requests with self-proclaimed achievements. World Bank President David Malpass remarked in response to the G24 group’s concerns that, “The World Bank Group has provided unprecedented support, responding with scale, speed, and impact…In the last fiscal year, IDA committed $38 billion and IBRD, $33 billion. Altogether, this was a 68% increase from the pre-pandemic average.”

Annual Meetings 2022 Wrap Up: As the world runs out of time, BWIs fail to provide clear vision and bold actions