Women, work and the economy 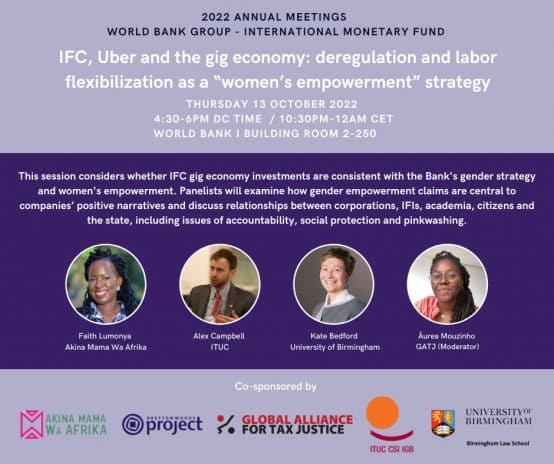 Notes from a Civil Society Policy Forum panel on 13 October titled "IFC, Uber and the gig economy: deregulation and labour flexibilisation as a 'women’s empowerment' strategy," where panelists explored IFC research underpinning the claim that a lightly regulated gig economy empowers women, as workers and consumers. Speakers discussed how gender empowerment claims are central to companies’ positive narratives about their business model and also the relationship between tech firms, IFIs, academia, citizens and the state in this context, including issues of accountability, social protection and 'pinkwashing'.

IFC Uber Report: On March 1, 2018, International Finance Corporation (IFC), part of the World Bank Group (WBG) launched the report Driving Toward Equality: Women, Ride-Hailing, and the Sharing Economy, which explores how women and men participate in ride-hailing, particularly in emerging markets. The report uses data from Uber and survey results of more than 11,000 drivers and riders. It sheds light on how the emergence of ride-hailing is affecting women’s work and mobility and how companies across the sharing economy can ensure women’s equal participation and gain.

Âurea (Moderator): Let’s start with some thoughts from the panelists on where their interest in this topic is coming from, to contextualise the discussion.

Kate: I’ve always been interested in looking beyond the rhetoric about women’s inclusion, and the role of free markets in gender empowerment. But the bigger context is the Uber Files – they were leaked to newspapers a few months ago, and showed law breaking.

Kate’s findings: IFC has produced three key reports (one in 2018 with Uber, and on Uber, then 2020 Sri Lankan Start-up called ‘Pick Me’), and also in 2020 on gender segregated transport in ride hailing. The research underpinning the conversation is weak. It’s leading to recommendations that benefit ride hailing companies. The 2018 report blurs the line between company lobbying and research. IFC responded in the 2018 findings in the Uber report were corroborated in the 2020 Pick Me report. IFC is not clear that it made a $2.5 million dollar investment in Pick Me. It has hailed the app as a success, but funded it. It repeated the claim from the Uber study that ride hailing enables women to be empowered. In the literature review, the academic work is very narrow, there’s nothing on the worker strikes that occurred in 2019. A quick google of Pick Me shows English language articles from the Sri Lankan press of complaints from drivers. This information is not hard to find. The findings on data was from a very small number of women (26 women). This information doesn’t support the headline about women being empowered. Childcare isn’t mentioned in the report. The focus on finance is on digital inclusion, not on issues around workers buying equipment to do their job, for example.

Kate’s key recommendations: Firstly, research quality needs to be improved. Secondly, it must involve the Inclusion of different experts; CSOs, unions etc. Thirdly, WBG’s research is still so highly regarded for its policy, we need to be wary of this. Others look to them for their development work.

Alex: For many years, women have been overrepresented in precarious work. They’re excluded from formal work and high paid work. Uber and the gig economy promises not only to change that, but to offer empowerment via flexibility. We know that people don’t care about labour conditions. The US labour department has recently said they will look at conditions of gig economy workers. If we really cared, the share prices wouldn’t have dropped 10% following that news.

The argument that flexibility can empower women has problems: it’s a theoretical argument that falls down in practice. Some people do benefit from the flexibility. ITUC talked to drivers across the world. This work requires stability from someone else in the family. The flexibility means nothing without stability elsewhere, from another income. Those risks and downsides fall more heavily on those with less stability. Not to mention those in debt. Many countries have banned Uber, and have struggled to regulate their work.

Alex’s key recommendations: the answer is bringing people into the formal workplace, so that they have the rights from an employer. Cities like Bogota have undertaken phenomenal infrastructure and improved workers’ rights together. Expanding workers’ rights, working with the existing transportation systems (having a green way forward), respecting workers stability, not precarity, is vital.

Âurea: What I’m hearing from panelists is that the lack of accountability is important. Faith, how do the proposals of flexibilisation etc, relate to wider macroeconomic policy given to countries?

Faith: When you look at investments by International Financial Institutions (IFIs), there is an assumption of ‘one size fits all’. Being from Uganda, on an investment done by IFC into a company called Bidco – investing in biofuels – the assumption that was made was that the way the oil palm project had been applied in Asia would also work in Uganda. Many assumptions were made, and this is also happening in the gig economy.

The gig economy doesn’t apply in our context in Uganda because it is actually full employment for many people. It is their whole source of income and livelihood. Assuming there is opportunity for additional income, it leaves you wondering. It’s not a transport service, it’s Uber providing a technology service. When it comes to taxation, it counts as technology. Individuals who are working have to buy the cars, smart phones and internet themselves: many people cannot afford these things. In the fourth industry revolution, the companies don’t own assets, so it’s about the data the companies provide.

The challenge was only about extraction of labour previously, but now in the fourth revolution it’s about extraction and also exploitation. It’s exclusionary, that for women, it’s not every day that someone will have financing for a vehicle, a smart phone and internet access. It does not work in the context of Africa.

In South Africa, one requirement there is that your vehicle should be a 2014 version and above. Recognising the intersecting challenges we face, as a woman have to figure out healthcare, education etcetera on our own, is vital. Because of how the economic system has been structured, in that the government is no longer playing a role, it’s almost impossible for us to actually benefit. When you look at participation rates in the gig economy, it’s mostly men with money and social capital.

When we talk about women’s economic empowerment, we must think about women’s unpaid care and domestic work. The assumption made by IFC is that there will be more flexibility in terms of schedules, however because of the gig economy system of earnings meaning you must work long hours to actually make enough money, the flexibility goes out of the window. It’s also difficult for women to get more rides when they rely on good reviews, as these are less likely to be given to women.

Âurea:  Those are very good points. The companies don’t even contribute to the rearrangement of care work for women.

Faith: There is no (worker’ union) organising for Uber workers here in Uganda, though I know there is some in Kenya. The companies don’t pay taxes, so they are not contributing to social systems in that country. There is a lack of social protection. The question of financial intermediaries, can Uber wash its hands of loans sharks who help people buy a car? Ultimately, if BWIs want to provide gig economy as a women’s empowerment strategy, they must consider how they look at due diligence. At every level, they would have to bring women in the conversation.

Rachel Noble, Action Aid UK: I don’t have a question, I just want to share some additional points from the initial research we’ve been doing at Action Aid UK. Uber has also avoided playing millions in taxes, it shows that they do not care. Uber and UN Women went into partnership in 2015, there were a number of prolific sexual violence cases. It is about instrumentalising women; issues around precarity, debt, safety etc.

Amy McShane, Bretton Woods Project: Given everything that has been said, I wonder where the panelists see this going. With the likes of the (thankfully recently cancelled) Blackrock & UN Women partnership, we’re continuing to see this corporate capture in development, and pinkwashing of corporations. Where do you expect the BWIs to go with this?

Alex: We see the increasing influence of private investment. From a Union perspective, you can’t replace public investment. It doesn’t surprise me that there’s a recourse to private capital. Technology can be part of how we do things, there’s nothing inherently bad about an app that helps take you somewhere, it’s just that under the hood things are different. And we need a call for public investment.

Faith: It’s about strengthening our demand, to strengthen systems and frameworks and around corporate accountability, and emphasising the need to have a UN legally binding treaty on business and human rights. It shows there is a need for a global legally binding framework. The EU has insisted on non-binding principles on human rights, and the US has been hesitant. Bold steps need to be taken to manage corporate power.

One concern I personally have, is that drivers do invest a lot when it comes to operating, but they only get 25% back and this needs to be reviewed. But it goes back to the corporates. Our governments no longer have the ability to determine minimum prices, minimum wage etc. This environment is not in support of ensuring individuals get paid properly.

Kate: The Bank has seen over the past few years a touch time to look for creative moments, with insider and outsider moments. I watched the IMF’s panel around the gender strategy; I remember that energy being around the Bank previously. That dynamic (of disagreeing and clashing) takes its toll. We need to hold these actors to account, and that hasn’t been huge around the Bank in recent years. The idea that corporations are pioneers of gender equality, when corporations claim that they are opening themselves up to critique, every time they claim this, they are exposing themselves to CSOs holding them to account.

This is a symptom of the corporate embodiment, and corporate capture, and also of development financing and funding independent research on gender and development.

Women, work and the economy