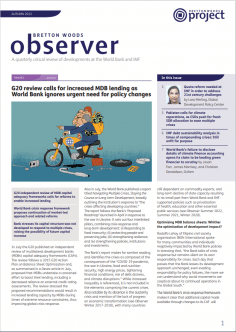 Heads in the sand: The IMF discusses debt sustainability

Whether in the South or in the North, women bear the burdens of the debt crisis and structural adjustment policies 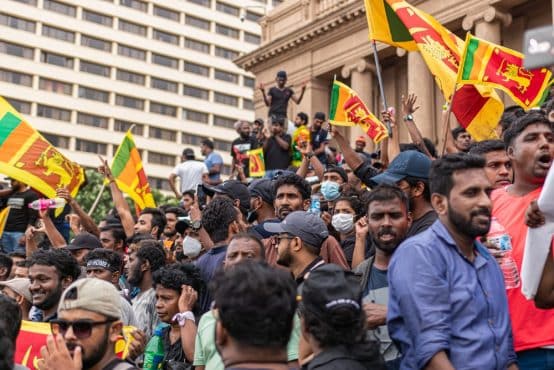 Many people unite on the steps of the Presidential Secretariat HQ with national flags during mass economic protest in July 2022 in Colombo, Sri Lanka. Credit: Valmedia/Shutterstock

In July, massive protests engulfed Sri Lanka as the debt-distressed country sank deeper into crisis. Two months later, the IMF announced a $2.9 billion package for Sri Lanka, and shortly thereafter another $1.3 billion loan to Zambia, which had defaulted on its debts in 2020. The latter comes with tough conditions: According to the loan agreement, Zambians will have to shoulder “a large, front-loaded and sustained fiscal consolidation.” But further interventions from the Fund may soon be needed. Based on the IMF’s latest numbers from 29 August, eight low-income countries are already in debt distress and 29 at high risk. Meanwhile, Pakistan’s climate disaster risks unravelling their recent IMF loan restart (see Observer Autumn 2022).

Against this backdrop, on 8 August the IMF published a staff guidance note to operationalise its new Sovereign Risk and Debt Sustainability Framework for advanced and emerging market economies – a process which is key to determining whether countries’ debt is ‘sustainable’ as global economic headwinds worsen (see Observer Spring 2021). With rising inflation and interest rates compounding the economic, climate, health, food and fuel crises, the time for the establishment of a long-demanded comprehensive multilateral sovereign debt workout mechanism has never been more urgent. Yet, with increasing complexity of the creditor landscape, the international sovereign debt architecture remains a melange of inadequate and insufficient attempts, including the expired Debt Service Suspension Initiative (DSSI) and the hardly-used G20 Common Framework (see Observer Summer 2022, Spring 2022).

While comprehensive multilateral solutions may not currently be politically feasible, decisive action is needed to prevent a domino of defaults. However, the IMF’s unfounded optimism about countries’ ability to service debts, along with unrealistic fiscal consolidation targets and resistance from large private and multilateral creditors to debt haircuts, has meant that the debt restructuring has fallen short.

Determination of liquidity vs solvency crisis is highly political

While the Fund has released its overall framework for debt sustainability analysis (DSA), its precise methodology remains “strictly confidential”, with the argument that it is “market-sensitive” and nondisclosure “avoids disruptive reactions…particularly if judgement is needed.” This continued lack of transparency is problematic, as the DSA framework is “legally and macroeconomically biased towards…underestimating sovereign insolvency problems,” according to Dr Karina Patricio of University of Leeds (see At Issue Autumn 2022), resulting in a “persistent pattern…that underpins the widespread trend of post-pandemic austerity in the Global South.” This bias has created a history of self-admitted “heroic” over-optimism, which “can involve pretending that countries face illiquidity and not insolvency, letting creditors avoid significant upfront losses and blithely dissembling that debt can simply be rolled over and extended,” wrote former US IMF representative Mark Sobel in the Financial Times in August. As a result, private sector lenders have repeatedly been paid off with IMF-backed public funds, while the local population bears the burden of ensuing austerity and deepening inequality (see Dispatch Springs 2022; Observer Autumn 2020). Denying countries adequate debt relief thus not only has significant human rights implications, but also contributes to the erosion of the public sector and the financialisation of development, in line with the World Bank’s Billions to Trillions and GRID agenda. As the IMF itself has noted, these dynamics contribute to social unrest.

Research by Boston University’s Global Development Policy Center has also shown that DSA is far from politically neutral: Borrowing countries with high foreign direct investment from Western European private lenders face harsher austerity conditions, while those whose trade and diplomacy align with Europe get lighter ones. Moreover, the lack of adequate early restructuring extends a debt crisis, leading to prolonged suffering and frequent failure of later IMF programmes, as evidenced by the Fund’s 2018 Review and a September report from Germany-based civil society organisation (CSO) Erlassjahr. The massive failure of Greece’s IMF program demonstrated many of these dynamics: excessive over-optimism, politicised decision-making, dire austerity, delayed restructuring, and deep recession (see Observer Spring 2015). While Zambia’s announcement called for a large-scale debt restructuring, it remains unclear how much will be cancelled or simply rescheduled by a decade, as highlighted by Tim Jones, of UK-based CSO Debt Justice, on Twitter.

A lack of transparency in sovereign debt is a major hurdle to more realistic assessments, something leading IMF and World Bank economists have stressed. The arguments for not disclosing its analysis then seem specious, especially given the major signalling power of the IMF’s debt sustainability assessment as the “lender of last resort”. Making its criteria public and assessments more conservative would create greater legitimacy and accountability. It might also enable the Fund to make a credible assertion that it will not rescue a country without serious debt restructuring, including by private creditors, thus eschewing the current moral hazard-inducing expectation that IMF-facilitated official debt relief will eventually enable private debt repayment, something over 100 experts called out in September.

A DSA fit for the current global context requires “a view of debt sustainability that is conducive to long-term development strategies and is based on consistent macroeconomic policies and the sustainability of the balance of payments in the longer term, rather than short-term debt service goals,” writes Patricio. Otherwise, there is a significant risk that many low-income and climate-vulnerable countries will remain trapped in a spiral of debt, austerity, and bailouts from which they are unlikely to emerge (see Observer Autumn 2022), while the prospects of regaining the fiscal space needed for achieving sustainable development, realising human rights, and responding to climate change effectively fade into the distance.

Heads in the sand: The IMF discusses debt sustainability

Whether in the South or in the North, women bear the burdens of the debt crisis and structural adjustment policies