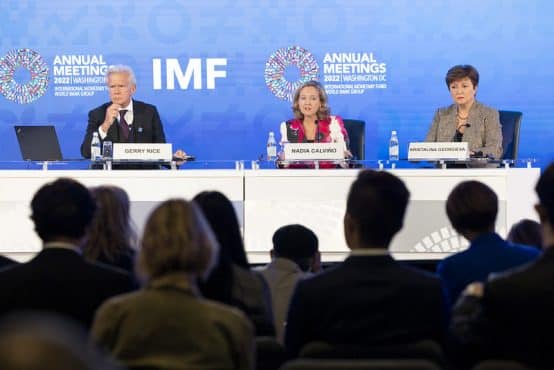 The 46th meeting of the International Monetary and Financial Committee (IMFC) during the World Bank and IMF 2022 Annual Meetings again issued a Chair Statement instead of a communiqué, on October 14. The IMFC is the direction-setting body of finance ministers and central bank directors for the IMF. The communiqué of the IMFC usually sets out the consensus position about the direction of the Fund and key reforms. Individual ministerial statements to the IMFC, often revealing of the true differences of opinion amongst the IMF’s membership, as well as statements from observing UN bodies, are also made available online. The next IMFC meeting is expected to be held on April 21, 2023.

The IMFC once more issued a Chair’s Statement instead of a communiqué, reflecting Russia’s continued blocking of unanimous consensus. Both Russia and China only participated virtually in the meeting. Like the previous chair’s statement at the 2022 Spring Meetings (see Dispatch Springs 2022), the opening of the statement recalled the UN resolutions condemning Russia’s invasion of Ukraine, as well as repeating calls for “greater international cooperation and strengthened multilateralism to prevent fragmentation and safeguard global economic integration.” In the accompanying press briefing, IMF Managing Director Kristalina Georgieva quipped that “geopolitics turn into geo-economics.” Individual ministerial statements included even stronger language, with the US pointing out their military and economic support for Ukraine, and statements from Germany, other European countries, and Spanish Minister of Economy and IMFC chair Nadia Calviño making it clear during the press briefing that, “The single most effective measure to significantly improve the bleak outlook would be if Russia stopped the war.” China on the other hand merely called “on all parties to contain spillovers from the Russia-Ukraine conflict,” while praising the importance of consensus, understanding and collaboration.

The fear of inflation clearly eclipsed any further discussion on the Covid-19 pandemic or vaccine inequality. The statement emphasised that “priorities are to fight inflation and protect the most vulnerable”, mirroring the general gist of broader discussions at the Annual Meetings. Yet, as “responsible fiscal policy” was repeatedly highlighted by Georgieva as key to inflation containment, social protection was only considered in the form of “temporary and targeted support” to the “most vulnerable”, directly contradicting the ILO’s IMFC statement, which called universal social protection essential. The solution suggested for the food crisis was merely lifting export restrictions on food and fertilizers, once again failing to make the connection to financialisation and speculative commodity markets, which was clearly highlighted by UNCTAD’s IMFC statement (see Observer Summer 2022). Although Georgieva admitted that “globalization didn’t benefit everybody,” adding, “we cannot gloss over this anymore”, and the need to focus on inclusive and fair policies to counter right-wing movements and social discontent becomes more urgent than ever, the IMF’s own role in fuelling inequality through the continued promotion of austerity remained unacknowledged. UNCTAD’s clear call to “avoid a policy-induced global recession” and for policy makers to “avoid an undue reliance on monetary tightening and foreswear a premature return to austerity budgets” did not make it into the joint statement.

Much of the language on climate response was a direct copy-paste from the previous statement, such as reiteration of commitments on climate change in the Paris Agreement and the ambition for a “timely, smooth, and just transitions to net zero.” Beyond the net zero agenda being a dangerous false solution, calling the current climate response “smooth” and “just” seemed strangely out of touch both with the deadly reality in climate vulnerable countries already facing floods, droughts and hunger, and the timid scale of solutions offered at the Annuals. A large paragraph promoted the newly operationalised Resilience and Sustainability Trust (see Observer Summer 2022), highlighting the importance of “timely” and “broad-based” contributions – undoubtedly reflecting frustration at the slow pace and limited scope of rechannelling commitments – as well as collaboration with the World Bank in its implementation. Voluntary Special Drawing Rights on-lending was called a “line of defence” as a safety net – e.g. to close the funding gap in the Poverty Reduction and Growth Trust – and a “line of offence” to address climate change by Georgieva. While the statement committed to utilising “policy mixes based on all effective tools, ranging from fiscal, market and regulatory actions, including efficient policy instruments to reduce greenhouse gas emissions,” conversations with IMF decision-makers at the Annual Meetings still seemed to mainly fall on carbon taxes. The statement did add new language on the need for adapting energy markets and promoting renewable energy, “as well as strengthening the social support to green and sustainable transition.” No further detail was given on what form or scale this social support would take, but the universal emphasis on targeted and temporary measures previously does not bode well for the prospects of a truly just and sustainable transition.

Urgency on debt resolution was felt but no new ideas offered

Concerns about the sovereign debt crisis had also grown compared to the Spring Meetings, with the statement hailing Zambia’s recent restructuring as a success story and all but recognising the shortcomings and lack of momentum of the Common Framework (CF) as the only game in town. While there was a repeated emphasis on “timely, orderly, and coordinated” progress on the CF, perhaps indicating a legitimate fear of brewing disorder and social unrest, the statement explicitly called for “explor(ing), with all stakeholders, ways to promote stronger creditor coordination for debt restructuring where the Common Framework is not applicable and to develop further complementary avenues to foster greater global consensus on debt challenges worldwide and appropriate ways to address them.” The statement then goes on to praise the IMF’s recent work on debt transparency, contractual provisions for restructuring, a new debt sustainability framework and revised sovereign-arrears policy, although the Fund’s framework methodology remains shrouded in secrecy (see Observer Autumn 2022).

What else is there: governance, diversity, and crypto

With the 16th IMF Review of Quotas inching closer and civil society calls for governance reform at the deeply undemocratic BWIs growing louder, the statement made no new commitments on quota reform, merely replacing the Spring Meetings’ ambition for “making further” progress with “accelerating” it. More detailed comments were made on the IMF’s “new” work areas such as climate, gender, digitisation and fragility, welcoming the respective strategies, although the caveat of macro-criticality and instrumentalist approach to gender equality as a growth-enhancer were emphasized several times. Collaboration and dialogue were highlighted here, yet whether this would go beyond the World Bank was not specified. The statement urged the IMF “to step up improvements in staff diversity and inclusion, responding to the specific challenges identified in the FY 2020 – FY 2021 Diversity and Inclusion Report.” Unfortunately, said report seemed exclusively focused on gender and regional representation, while other facets of diversity – such as a wider range of economic education and heterodox viewpoints – were not considered. Crypto currencies again received an honorary mention, singling out “stablecoin”, reflecting a growing engagement of the Fund on this topic in recent research.