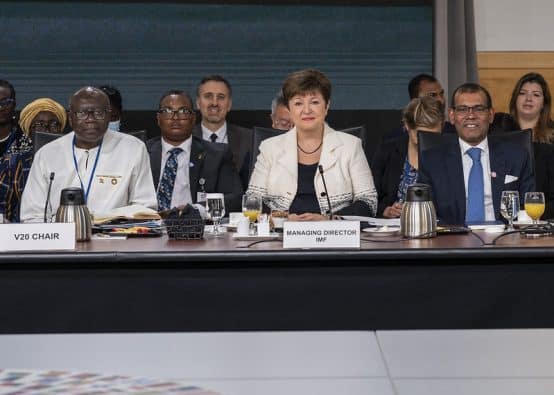 The finance ministers of the member countries of the Vulnerable Group of Twenty, a bloc of countries that has grown to include 58 developing country economies representing some 1.5 billion people, including new members Chad, Côte d’Ivoire and Kyrgyzstan, issued a communiqué on 16 October, after meeting during the Annual Meetings of the World Bank and IMF.

The V20 finance ministers’ in-person meeting at the IMF on 16 October formed a much more high-profile affair than in previous years, with IMF Managing Director Kristalina Georgieva joining the proceedings, as well as representatives from multilateral development banks and G7 governments.

However, World Bank President David Malpass, the target of continual protests during the Annual Meetings due to his weak record on climate, opted to skip the meeting, sending Mari Pangestu, the Bank’s managing director for development policy, in his place.

The V20 ministers highlighted the urgent need to act on interlinked, and deteriorating, climate and macroeconomic conditions. The V20’s communiqué expressed, “grave concern at the failure of the G7 and G20 to align their policies with Paris Agreement goals, further exposing the fifty-eight (58) V20 economies to multiple and cascading risks now and in the future.”

The bloc highlighted, “that the V20 has at least 435 billion US dollars of debt servicing payments due in [the next] 4 years at a time when new investment is severely needed and when we have lost more than half a trillion worth of GDP growth over the last two decades” due to climate change impacts, adding, “the effects of climate change are far reaching in terms of capital cost, inflation, debt ratings and other economic and financial terms.”

In this context, the V20 issued a strong call for action. “We are living not just on borrowed money but on borrowed time, and that time is running out,” said V20 ambassador Mohamed Nasheed, former President of the Maldives, at the meeting per reporting by E&E News.

Echoing calls expressed by civil society and debt experts during the Civil Society Policy Forum earlier in the Annual Meetings, the V20 called “for an immediate reform of the sovereign debt restructuring architecture. Debt sustainability analyses need to be tailored to V20 member circumstances. Then, through guarantee facilities and regulatory action all creditor classes must be compelled to reduce the level of debt in V20 countries.” This followed the New York Times reporting on 15 October that some climate vulnerable countries may opt to cease debt repayments in a coordinated manner, in order to push for debt relief.

Crucially, this includes the need for debt relief from the World Bank and its multilateral development bank (MDB) peers; a recent briefing from Boston University’s Global Policy Development Center found the Bank holds 20 per cent of the V20 countries’ $686.3 billion in external public debt, while other MDBs hold an additional 20 per cent of the total.

The V20 also called for, “further allocations of Special Drawing Rights, some of which should be ‘rechanneled’ into the IMF’s newly created Resilience and Sustainability Trust that should be enshrined in country ownership whereby V20 Climate Prosperity’s Plans form the core of recovery efforts” (see Observer Autumn 2022).

The V20 also called for the IMF to continue to take steps to assist its members in addressing the macroeconomic impacts of climate change, noting, “Having advocated [for] the integration of physical climate and transition risks into the IMF Article IV instrument, we maintain it is critical to sustain reform and establish a fit-for-climate IMF with ongoing efforts to review, rethink, and continuously improve its ‘surveillance’ approach to climate risks of all kinds in its Article IV surveillance activities with all economies” (see Observer Autumn 2021). The V20 added, “we believe it is important to rethink and recalculate IMF debt limits to take into consideration climate change, and link debt flexibility and support to climate action along with guarantees, to avoid liquidity crisis and cost of capital repricing.”

The bloc also called for the World Bank to align its Country Climate and Development Reports (see Observer Summer 2021) with the Country Prosperity Plans that V20 countries have developed.

The bloc called on the Bretton Woods Institutions to recognize the V20 as an official constituency of the World Bank and IMF, “given the V20’s unique experience and expertise representing the common priorities and interests of 58 of the world’s most climate threatened developing economies.” The V20 plans to open a permanent office in Washington DC in 2023.

The communiqué noted, “We seek to contribute to the agendas of the International Monetary and Financial Committee and the joint World Bank-IMF Development Committee, as well as other relevant fora,” and requested that the IMF formally meet with the V20 twice a year.

Such a development would be one step to give V20 countries more voice at the IMF, an organisation that has been heavily criticised for a democratic deficit that sees wealthy creditor countries over-represented on the IMF’s executive board.