Platform for Collaboration on Tax

Proposal for a United Nations Convention on Tax 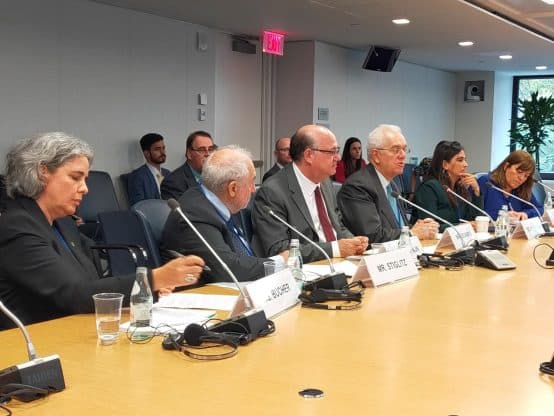 Panelists at the CSPF panel, "Winds of change: the future of tax reforms in Latin America"

Notes from a Civil Society Policy Forum panel titled "Winds of change: the future of tax reforms in Latin America." Inflation, high debt levels, recession and large fiscal deficits are amplifying inequality and extreme poverty worldwide. Countries are responding with spending cuts that will hurt the poor. However, Chile and Colombia are among the few countries taking an alternative path: taxing wealth which could bring more progressive and redistributive systems. Other countries in the world could learn from these experiences and choose alternatives to austerity in response to the crisis. This push for taxing wealth could also bring the IMF to give more impetus to progressive taxation in its advice to countries in these challenging times.

Colombia is in the middle of an ambitious tax reform, which will raise 4.7 billion USD (time not specified), fight tax evasion, and tax the rich; it will add a 3 percent of GDP adjustment to the primary surplus.

It has three main elements:

The windfall tax will be more important initially, but it will fall as international oil and coal prices fall;

A decent tax agreement in the UN could complement this tax reform, this will be referred to in the G24 statement, but the lead implementing countries could obtain so many exceptions.

Chile is following a similar path to Colombia… Colombia is reforming its entire tax system, but it could also make sense to change a few taxes.

Public spending depends on permanent income, not current income… for social protection/policy, we need to increase permanent income, through taxation. Fiscal consolidation and tax reform is the responsible way to make that happen.

Chile has tax rates similar to OECD countries, but corporate taxes are low and can be evaded, so companies don’t necessarily pay any tax – so in effect, there is no tax on capital.

The wealth tax will be complementary to the income tax, and will make the tax system more progressive. Chile is also trying to reduce tax evasion in the system.

All political parties agree on lowering tax evasion and avoidance. Technology will help with this; this is a capability they didn’t have in the past.

There will be emergency taxes, not just permanent taxes.

Colombia and Chile are moving in the right direction…they are implementing important tax reforms.

For a quarter of a century, or even as long as 40 years, the public sector has been starved; there have been no resources for high-return public investments. This long-term starving of the public sector has happened in both developed and developing countries. Tax structures today are not progressive and in many cases are actually regressive. This causes structural harm and resentment, fueling political demagogues.

The pandemic, the high cost of living, food prices and energy are imposing enormous stresses on our society; the challenges are to society as a whole, but also of distribution. Energy companies are making high profits, but consumers are being hit hard. (Even in Norway, which is an energy exporter, consumers still being hit hard). We need to do something about this.

Old recipes, old solutions, are being imposed… the IMF is imposing austerity again; but it may be learning. Modern macroeconomics states that countercyclical fiscal policy is necessary, but emerging markets (especially ones with fiscal rules) find it hard for them to borrow – they need more fiscal space. One way to do this is through wealth and windfall taxes, taxes on profits. Deductions are allowed, for instance capital deductions through depreciation, so this is non distortionary; it does not affect investment or employment.

Stiglitz wrote an article explaining this 49 years ago!

One context where developing and emerging markets can suffer is in the race to the bottom, so the OECD minimum tax rate is a step in the right direction.

Developing countries need more revenue, many countries have rates of 25 percent or more… but a minimum tax rate of 15 percent could hurt many countries by forcing their tax rates down to that level.

Inequality is at the root of many of the world’s problems, and is now at such extreme levels.

In the debt and climate crises, inequality is at the root of all these problems as well. It raises questions like who will get healthcare? Who will get resources? Social protection? Land? Food? A voice? It is the difference between living and dying.

This extreme inequality is the result of the systematic accumulation of wealth and power… and now wealth taxation is not spoken of as much, because it challenges the status quo.

Latin America is a very unequal region of the world. It has seen a reversal of the 20-year trend toward poverty reduction and an explosion of wealth; one new billionaire was created every 30 hours during the pandemic, in Latin America one every month. Most governments fuelled the increasing inequality and didn’t do much to reverse it. Many didn’t increase taxes on the rich, and more reduced them; half of govts reduced health spending during the pandemic, so states literally took resources out of their own hands. Only a very few countries increased taxes on the wealthy.

There is also a gendered aspect. Wealth tends to have a male face, poverty a female face. Inequality leads to lack of opportunity.

We are now in the third global shock… first the pandemic, then ukraine, and now we are starting in the third shock, tightening financial conditions. Before the shocks there were pre existing challenges, including debt issues and constrained finances, which hobbled states’ ability to respond, also economic inequality.

We need to address all three simultaneously, and to do this, we need tax reforms to get more revenues, and resources for states.

If we want to be sustainable, in fiscal terms, we also need to be socially sustainable. So both need to happen at the same time.

We need revenue mobilisation to provide social support to the most vulnerable, and to provide public goods.

In the pandemic, in Latin America, there was a lack of public services, this was very explicit, and it is clear we need to provide these services.

Where is the money going to come from? VAT, corporate tax and personal income tax.

VAT is largest tax in the region; corporate tax has loopholes, and there are problems with race to the bottom. Personal income tax is very different from the OECD, it is 10% of total revenues in Latin America compared with 25% in OECD. There are high thresholds for personal income tax, only a few rich end up paying; also it is very low and not really progressive, and there are a lot of deductions.

Policymakers must recognise public frustration with inequality, especially post-pandemic and with rising inflation. We need to prioritise growth, fiscal sustainability and inclusive growth.

In Latin America, distrust of the state is common. Tax reform can only work if it is socially and politically sustainable. Inclusive means more progressive.

Colombia’s new tax framework is in agreement with the OECD framework.

Tax avoidance and evasion is associated with international financial flows, and relocating to low tax areas, for instance Colombians who move to Florida are a potential problem for Colombia. We would need a global system to eliminate tax evasion completely.

Technologies are improving the possibility of tax collection/reducing evasion. Digital payment also helps; tax administration can use it and people can benefit too. The wealth tax and personal income taxes will be critical moving forward.

Now is the time for tax reform, but competition, the race to the bottom over tax, is a real threat. We need inclusive growth, equality… and this is not free. We need to invest as a society to make that happen, we need revenues to do that.

We need tax cooperation and coordination. We have the technology, we can modernise our tax authorities, improving revenues, sharing experiences and learning to reduce informality. This informality is a concern for Chilean tax reform.

In the Chilean case, the structure of the tax system, personal income tax is low, so it is a key focus of tax reform, as is avoidance. There is a high threshold of tax, so many poor don’t pay tax.

The top three percent of earners are the focus of the tax reform, as are deductions.

There is a general problem of insufficient taxes: deductions on homes are liked by homeowners and the finance sector but both of these are bad for the economy. Debt finance has been pushed way too far, eg. 2008.

If you broaden the tax base, you can get the same revenue at a lower rate.

In most countries, the complexity of the tax system is such that VAT collection is easier than filling out tax reforms for income tax.

The threshold should be high, low earners should be taxed by VAT, high earners with income tax.

Colombia is sending people a tax bill, letting them challenge it, so they are not imposing huge administrative costs. There was a movement in the US, but tax accountants didn’t want that, because at the moment, you have to pay a lot in order to pay your taxes.

The IMF should encourage a reduction in administrative costs for tax bills; the digitalisation of the government can improve transparency.

The US raises inflation to reduce inflation, but this puts inflationary pressure on others and causes debt crises, these are beggar thy neighbour crises.

Volker raised interest rates in the 1980s, he was warned about the risk of a Latin American financial crisis, but he ignored this, saying the US economy was his concern. (This fueled the Latin American debt crisis of the 1980s).

High interest rates will have a limited effect on inflation as it’s not demand driven. Supply side disturbance is the cause. Fiscal measures are the solution, investments in green technologies and agriculture. There is a lot we can do on the supply side to address inflation.

They can design a windfall profits tax that is effective; all these revenue measures are absolutely essential for addressing the multiple crises, it is the lowest hanging fruit.

Large changes in relative prices are stressful for the economy.

We underinvested in resilience, so price increases are more stressful; and low resilience, low capacity sectors that didn’t invest in capacity are being rewarded with higher prices. Oligopoly and monopoly power are key in underperforming sectors being awarded these windfall profits — this concentration of market power is a strong argument for windfall taxes.

‘Inequality kills’ is the powerful title of the Oxfam report, and  it captures the issue well.

87 percent of pandemic loans include austerity measures, but how does this square with rhetoric about addressing inequality?

Fighting inequality and fiscal sustainability is the key.

On the expenditure side, we need to focus on the most vulnerable. But what we do must be fiscally sustainable. Wealth tax is not an issue in principle, but in practice high avoidance may mean that tax take is not high; it is not an efficient tax.

No tax is perfect, a lot of money will always escape any tax… but a wealth tax can supplement other taxes, capturing money that has otherwise escaped. 1 percent or so won’t cause a lot of distortions, and the wealthy have a lot of identifiable assets. It is not perfect, but in tax, two imperfects are better than one.

Digitalisation will make things much easier, and this will shrink the capacity to evade taxes. .

Colombia created a wealth tax in 1936, because capital income tax is always underestimated, so a wealth tax captures more revenue.

Platform for Collaboration on Tax

Proposal for a United Nations Convention on Tax