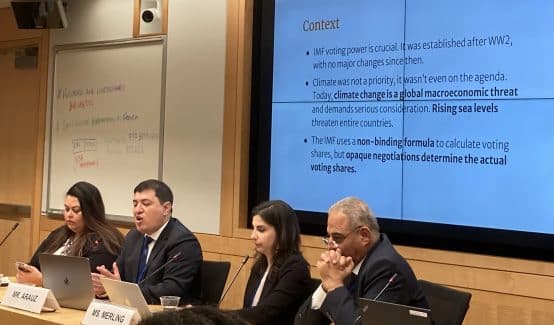 The climate crisis requires substantial mobilisation of international financial resources. Yet a country’s power in the global financial system is not tied to, and is in fact inversely related to, its share of responsibility for the climate crisis. To give more decision-making powers to countries most impacted by climate change and incentivise all countries to cut emissions, we propose a necessary update to the International Monetary Fund’s (IMF) quota formula by adding a variable representing member states’ share of cumulative (i.e. historical) carbon dioxide (CO₂) emissions. The IMF is currently undergoing its 16th General Review of Quotas, a process that is scheduled to conclude by 15 December 2023 (Observer Autumn 2022).

The largest global cumulative emitters of CO₂ are also the most powerful countries at the IMF in terms of voting shares. Advanced economies – 36 high-income countries as categorised by the IMF – are responsible for approximately 44 per cent of cumulative global CO₂ emissions since 1944 (the year the IMF was founded), according to data from the Potsdam Institute for Global Climate (PIK). They hold approximately 59 per cent of votes at the IMF. The quota formula, also used to determine a country’s voting power at the IMF, rewards economic size, trade openness, and the accumulation of reserves (see Inside the Institutions, IMF and World Bank decision-making and governance), but ignores countries’ contributions to the climate emergency. For the IMF to adequately provide climate financing solutions, its governance structure needs to consider member countries’ differentiated responsibility for, and vulnerability to, the climate crisis. This is a missing aspect of the IMF staff’s climate strategy (see Observer Autumn 2021).

As the Bridgetown Initiative proposed by Barbados Prime Minister Mia Mottley in September makes clear, one of the most important, concrete sources of debt-free and taxpayer-free climate financing is a new issuance of Special Drawing Rights (see Background, What are Special Drawing Rights (SDRs)?). Calls for a new $650 billion SDR allocation have been backed by over 150 civil society organisations (see Observer Autumn 2022). The issuance is a decision made by the IMF Board of Governors. Furthermore, climate-linked SDRs would benefit vulnerable countries of the Global South the most, but the voting power needed to reach that decision rests with advanced economies of the Global North. More precisely, the US exerted its veto power to block, for over a year into the pandemic, the last issuance of SDRs (see Observer Autumn 2021).

Terms of lending directly impact low- and middle-income nations’ fiscal ability to combat climate change, and their low voting power prevents them from influencing how the IMF will incorporate climate-related risks into its operations. From a fiscal perspective, higher quotas would increase developing countries’ debt-free SDR financing in a new allocation and would increase their access to conditionality-free rapid emergency loans.

The distribution of voting power at the IMF begins with a “calculated quota share” (CQS) determined by the IMF’s formula. However, the “actual quota share” (AQS) is determined by complex negotiations during a General Review of Quotas. The negotiations of the 14th Review resulted in the US’s share still being above the veto threshold of 15 per cent and a significant dilution of China’s share.

In a recent paper presented at the 2022 World Bank and IMF Annual Meetings Civil Society Policy Forum (see Dispatch Annuals 2022), we ran a simulation of IMF voting share recalculation with the addition of a climate variable, representing cumulative CO₂ emissions per country from 1944 to 2019.

The inclusion of this climate variable would significantly reduce the voting share of the greatest CO₂ emitters and increase that of the Global South. If we assume countries fully adopt our formula proposal (i.e. without subsequent opaque negotiations), the major winners would be 36 Small Island Developing States (SIDS): Their vote share would increase from approximately 2.5 per cent currently to nearly 21 per cent — reflective of the need to increase their decision-making power at the IMF given their vulnerability to climate change, especially rising sea levels. The US share would decrease from 16.5 to 5.64 per cent, and China’s share from 6.1 to 5.36 per cent. Along regional lines, 141 Global South countries would increase their vote share from 37.0 to 56.4 per cent, and, in particular, 48 Sub-Saharan African countries’ voting shares would expand from 4.9 to 9.0 per cent. Twelve per cent of the 36 advanced economies’ votes would be redistributed to 154 emerging and developing economies.

Our proposal for IMF governance reform would require the improbable scenario where dominant state stakeholders concede large portions of their current voting. However, we believe that “common but differentiated responsibility” reforms are critical in our climate emergency.

At the 2020 Annual Meetings of the IMF Board of Governors, IMF Managing Director Kristalina Georgieva issued a call to action: “Today we face a new Bretton Woods moment. Just as the pandemic has shown that we can no longer ignore health precautions, we can no longer afford to ignore climate change.…We focus on climate change because it is macrocritical, posing profound threats to growth and prosperity. It is also people-critical and planet-critical.”

As Bretton Woods institutions’ governance structures were necessary for post-war reconstruction, today’s international financial and monetary institutions must allow for new configurations of decision-making organised around equitable climate action as an urgent priority. If the climate emergency is to be taken seriously as a “macrocritical” risk to the global economy, major change is urgently needed in global economic governance. The IMF is the place to start.