The Office of the United Nations High Commissioner for Human Rights

Latest IMF gender research: Making the economy work for women, or women work for the economy?

The IMF Gender Strategy - Making the Economy Work for Women? 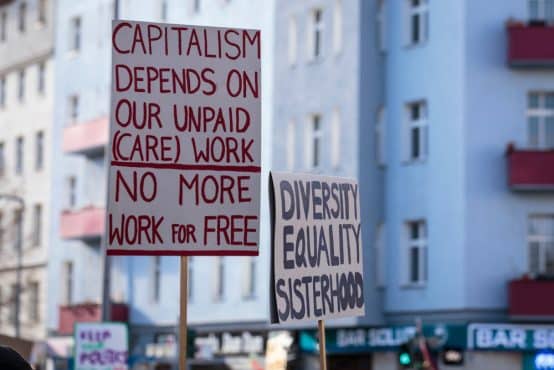 As the global economic outlook continued to worsen and the prospects of an “inclusive recovery” to build a more equitable post-pandemic economy faded, the IMF published its long-awaited Gender Mainstreaming Strategy in July (see Observer Spring 2022, Summer 2021). Following an online consultation in the spring and a prolonged drafting period, the new strategy sets out the Fund’s vision to “close gender gaps” to foster economic growth and stability across its surveillance, lending and capacity building work. While efforts were made to heed civil society organisations’ (CSOs) demands, articulated in a joint statement among other inputs, the strategy lacks a commitment to ensure its policies do not harm women and sees the Fund assume unprecedented influence over countries’ gender equality policies through loan conditionalities. As a result, over 300 women’s rights and economic justice groups and advocates openly rejected the document in an October letter.

Bringing together widely different agendas was no easy task

The Fund’s press release and discussions with IMF staff indicate that the strategy navigated a contentious terrain in its attempt to reconcile widely differing perspectives on whether and how the IMF should engage on gender. Conservative forces inside and outside the institution would prefer it to stick to its limited monetary and fiscal remit and are suspicious of expanded external collaboration. Strong civil society voices similarly denounced the Fund’s legitimacy and expertise to engage on gender, while providing extensive comments to the consultation, stressing the focus must be on assessing gendered impacts of IMF-promoted economic reforms and pursuing alternative policies that “do no harm”, in line with the UN Guiding Principles and states’ human rights obligations (see Observer Spring 2022, Spring 2019).

In a Civil Society Policy Forum event at the IMF and World Bank Annual Meetings in October, the IMF’s Senior Gender Advisor Ratna Sahay emphasised that her team worked hard to take on board key asks from civil society, such as mainstreaming gender rather than pigeonholing the topic, acknowledging that economic policies can exacerbate gender inequality and that greater focus should be put on the social and distributional consequences of adjustment policies and the “quality” of growth. The strategy also included a stand-alone pillar on collaboration with external experts including academia, UN Women and CSOs, directly building on civil society demands. Yet, challenges about the lack of deeper consultation with critical women’s rights groups and missing reflections of historical harms through IMF policies were not well received by Fund staff at the event, indicating a lingering unwillingness to acknowledge these harms and an expectation gap about the nature of meaningful consultation processes.

It is impossible for the IMF to conciliate a gender strategy with its 40-year history of an austerity bias that has negatively affected women’s economic and social rights, livelihoods, and well-being. What we are seeing is a pink-washing programme that promotes an ever-expanding encroachment into the policy space and economic sovereignty of developing countries.Veronica Serafini, Latindadd

To the frustration of CSOs, the strategy does not explicitly recognise and address the scale of the gendered impact of core IMF macroeconomic advice, in particular when it comes to ever-expanding austerity, which remains “off the table” in discussions with the Fund despite overwhelming evidence that it harms women (see Briefing, The IMF and Gender Equality: A Compendium of Feminist Macroeconomic Critiques). The consistent focus on “gender gaps” for the purpose of growth rather than transformative approaches aiming at an economy that fosters equality and wellbeing, and the suggestion of narrowly targeted mitigation measures to cushion universal negative impacts, cast considerable doubt on the willingness of the IMF to seriously investigate and rectify its own historic exacerbation of gender inequality (see Briefing, The IMF and Gender Equality: Operationalising Change).

“Rather than prevent negative gendered impacts by following alternative policies, as the IMF’s 2018 guidance note on operationalising gender recommended, the focus is now squarely on compensatory measures,” wrote Roos Saalbrink of ActionAid International in The Care Contradiction: The IMF, Gender and Austerity, published in October. “Targeted social protection schemes are in contradiction to the commitments to social protection floors made by countries, the United Nations and in the SDGs.” While the IMF – despite being a specialised UN agency – has long rejected that human rights frameworks directly apply to its mandate, positioning the Fund in relation to these frameworks would be necessary to develop “credible reference points for understanding or taking action on substantive gender gaps,” Saalbrink argued.

Care is a prime example. Although the strategy mentions women’s unpaid care work as a driver of inequality, it fails to draw the connection to women absorbing the shock of shrinking public services and social investment over recent decades. Clearly, “stability and growth” take precedence over safeguarding women’s rights in IMF policy advice and conditionality, without a deeper reflection on how the globalised, growth-based economic model itself has entrenched gender inequality and the climate crisis. “It is critically problematic to instrumentalise women’s labour force participation and gender gaps as ‘macro-critical’, in the context of the Fund’s decades long history of policy paradigms that have generated structural gender inequalities, such as fiscal consolidation, labor flexibilization, financial liberalization and the privatization of state-owned enterprises,” emphasised Bhumika Muchhala of Malaysia-based CSO Third World Network.

Another contentious point is the strategy’s inclusion of gender conditionality, in which Fund staff plan to impose gender-related targets in loan programmes, the negotiations of which are highly opaque and often lack democratic scrutiny or involvement of women’s rights organisations. Not only does this build on a neo-colonial history of IMF-imposed structural adjustment, which has had devastating impacts on women’s rights in the Global South, but it also threatens to usurp the normative space of intergovernmental expert bodies with a mandate on gender, such as the United Nations Committee on the Elimination of Discrimination against Women (CEDAW), as well as to eclipse the demands of countries’ own women’s rights movements. Over 300 CSOs and individuals publicly rejected the strategy as illegitimate “mission creep” and “commodification of the gender equality agenda”, with Veronica Serafini of Peru-based CSO Latindadd calling it “a pink-washing programme that promotes an ever-expanding encroachment [by the IMF] into the policy space and economic sovereignty of developing countries” in the accompanying press release. “We…question the [IMF’s] expertise [and its] technical and…ethical standing to advise in matters of gender equality and women’s and girls’ human rights,” added feminist activist Emilia Reyes, of Mexico-based CSO Equidad, in the same release.

While the gender strategy clearly opens doors for the IMF to better understand the impacts of its economic policies on women and to steer the Fund towards more informed decision-making, civil society and UN independent experts – in both reports and letters – have made clear that resulting changes will only contribute to women’s decent work, agency, and economic empowerment if they are accompanied by a willingness to challenge the IMF’s own long-standing institutional bias towards fiscal consolidation and its fixation on growth, and to pivot towards building an enabling environment for an economy based on care and wellbeing.

The Office of the United Nations High Commissioner for Human Rights

Latest IMF gender research: Making the economy work for women, or women work for the economy?

The IMF Gender Strategy - Making the Economy Work for Women?