Calls on World Bank to revisit investment in Lonmin, operator of violence-plagued South African mine

South Africa: The support of the World Bank and the IMF to the Apartheid regime 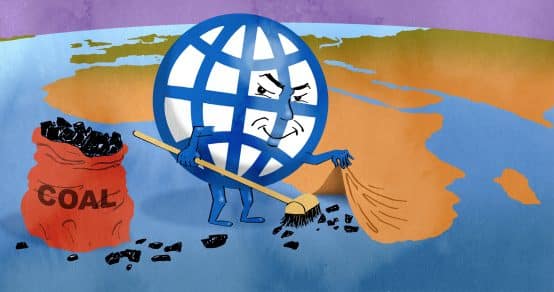 On 4 November, South Africa launched a much anticipated investment plan (IP) for its new Just Energy Transition Partnership (JETP). The plan calls for over $86 billion (1.5 trillion South African rand) of investment in the country’s energy transition over the next five years, with two-thirds of this going to the electricity sector, in order to begin replacing coal-fired power stations with other energy sources.

Significantly, the policy reforms undertaken as a part of the JETP – which seek to unbundle Eskom, South Africa’s much-criticised, state-owned energy utility (see Update 70), and create a more privatised, market-based electricity sector – bear the clear imprint of the World Bank and IMF’s controversial approach to structural adjustment in the power sector across the Global South in recent decades, raising fears about the JETP leading to increased inequality.

The World Bank has been heavily involved in South Africa’s energy sector over the past decade, providing a $3.75 billion loan to Eskom in 2010 that went primarily towards the construction of the 4800 megawatt (MW) Medupi coal-fired power plant (see Observer Spring 2019), a problem-riddled project that South African civil society organisations (CSOs) have repudiated as “odious debt” and demanded be written off by the Bank.

In order to pay for Medupi and two other [coal] plants, Eskom has raised the real price of electricity by more than 620% since 2007. Eskom is also in the process of privatising, and…its leadership aims to end cross-subsidisation that assists low-income usersPatrick Bond, University of Johannesburg

The JETP IP emerged after yearlong negotiations with an international partnership group (IPG) – including the UK, US, France, Germany and the EU – which offered South Africa $8.5 billion in financing for the initiative at the UNFCCC’s 26th Conference of Parties (COP26) in Glasgow in November 2021 (see Observer Winter 2021). However, the IP revealed that just 4 per cent of this finance ($330 million) will be provided by the IPG in grants, with much of the other financing provided as loans or guarantees. South Africa was the first emerging economy to complete a JETP IP, but others are already in the works in Indonesia and Vietnam, indicating that the South Africa JETP’s financing model and policy reforms may be replicated in other settings.

The JETP’s proposed reforms conform to a power sector restructuring agenda the Bank and Fund have promoted in the Global South since the 1990s, albeit with uneven success. Indeed, a 2020 World Bank research publication, Rethinking Power Sector Reform in the Developing World, acknowledged the need for more pluralist approaches, noting that while the Bank’s “power sector reform blueprint has demonstrated its ability to deliver in certain country contexts, the results have been quite disappointing in other settings,” raising questions about its suitability for South Africa’s low-carbon transition.

The JETP IP notes a new electricity sector bill is forthcoming, which will establish “an independent transmission company which will act as the system and market operator. The legislative reform…will enable the emergence of a competitive electricity market.” A policy reform included in a $750 million World Bank development policy financing loan to South Africa approved in January 2022 increased, “the 1 MW limit for license exemption for new embedded generation (EG)…to 100 MW,” a reform designed to smooth the entry of private actors in South Africa’s energy sector, including for renewable energy projects (see Background, What is World Bank Development Policy Financing?).

In a meeting with South Africa’s finance minister on 5 November, World Bank President David Malpass continued the Bank’s push for structural reforms, “to promote transparency and competition into the power market, encourage private investment into power generation, and improve the financial viability of Eskom.”

There are fears that such reforms will further increase costs for South African energy consumers. Professor Patrick Bond of the University of Johannesburg noted that “in order to pay for Medupi and two other [coal] plants, Eskom has raised the real price of electricity by more than 620% since 2007. Eskom is also in the process of privatising, and…its leadership aims to end cross-subsidisation that assists low-income users.”

The IMF, meanwhile, advocated for weakening labour protections to ease the country’s low-carbon transition in a January issues paper, arguing, “Bold reforms of labor market institutions in the areas of collective bargaining, employment protection legislation, and minimum wage-setting would give firms greater workforce management ability and boost employment opportunities for the inexperienced and the young.” Given that the concept of a ‘just transition’ was originally developed by labour unions, this advice runs counter to the ‘just’ dimensions of the JETP.

The Bank’s damaging legacy of support for fossil fuels in South Africa: From Medupi to Richards Bay

In parallel to the JETP IP’s finalisation, the World Bank approved $497 million in financing in late October for the repurposing of South Africa’s Komati coal power plant, which will include 150 MW of solar power, 70 MW of wind power and 150 MW of battery storage. On the eve of its investment in Komati, however, the Bank’s country office in Johannesburg was the target of protests on 14 October, as part of a global day of action against the Bank’s fossil fuel investments, with South African CSOs demanding the Bank’s Medupi loan be cancelled.

Bond argued following the protests that writing off the Bank’s Medupi loan to Eskom, “would dramatically reduce repayment pressure on the utility’s $22 billion debt.” However, in October the South African government instead announced plans to transfer two-thirds of Eskom’s debt to its own balance sheet, according to the Financial Times.

The Bank approved financing for Medupi in part owing to a severe energy crisis in South Africa, but the project was dogged by serious problems from the start, including allegations of corruption by Japanese contractor Hitachi (later substantiated) and chronic design flaws, which have resulted in repeated delays, cost overruns of 45 per cent and frequent loss of generating capacity (see Observer Spring 2019). The plant, initially due to be completed in 2015, was only finished in 2021; it is not among those slated to be retired under the JETP. A new World Bank Country Climate and Development Report for South Africa, published on 8 November, is conspicuously silent on Medupi’s woes.

David Hallowes of South African CSO groundWork said of the Bank’s Medupi investment: “At the time we told them it was wrong: Wrong on the choice of power generation technologies, wrong in its assumptions on what and who the power is for, wrong because of the massive social and environmental externalities, and wrong because people would pay the price of decisions taken without consulting them.”

Indeed, South Africa’s IP includes a 3000 MW gas power plant at Richards Bay in Eskom’s project pipeline – although the source of financing for it remains unclear. While the IPG made clear that their financing shouldn’t be used for fossil fuels, all eyes will be on the World Bank, as it is yet to clarify its policy on future gas investments (see Observer Winter 2021).

Calls on World Bank to revisit investment in Lonmin, operator of violence-plagued South African mine

South Africa: The support of the World Bank and the IMF to the Apartheid regime