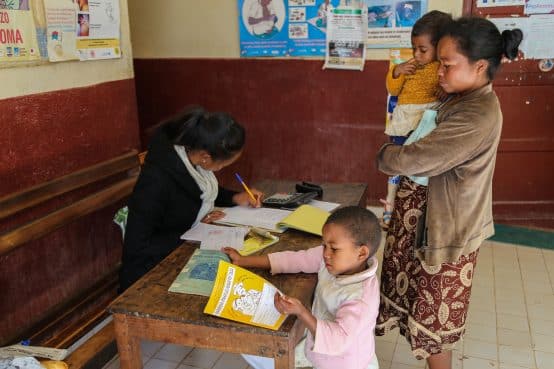 Mother attending a free clinic with her children in a small rural village in Madagascar. Credit: Mohamad Al-Arief/ The World Bank.

Following a limited consultation process, civil society were eager to respond to the Compass. Lena Simet of Human Rights Watch concluded that the Compass guidance note, “makes a strong commitment to USP. However, its guidance on how countries can get there is problematic.”

The Bretton Woods Institutions (BWIs) have long been challenged on their claims of being pro-poor in their approach to social protection. A wealth of evidence has highlighted the flaws of the targeted approaches to social protection preferred by the BWIs, such as Conditional Cash Transfers (CCTs), which have been shown to be ineffective at reaching the poorest – as the Bank itself acknowledged – prone to corruption, and less likely to protect human rights than universal schemes.

Instead of simply dismissing public social insurance and potentially creating costly parallel structures, we call on the World Bank to support countries in adapting their social security systems to be more inclusive.Dr Laura Alfers, WIEGO

The International Trade Union Congress released a statement citing “considerable reservations”, about the Compass as it “prioritise[s] the extension of targeted, non-contributory social assistance at the expense of social security, especially pensions.” The Global Coalition for Social Protection Floors (GCSPF) also responded, echoing concerns about the Bank’s ‘universal’ approach, citing incompatibility with the Bank’s focus on privatised and voluntary schemes, and a “lack of references and alignment with human rights and international labour standards,” such as social security minimum standards of the International Labour Organisation (ILO) Convention 102 and Recommendation 202. GCSPF also highlighted that both private finance and voluntary private schemes, which rely on individuals to have savings and often are inaccessible to informal workers, are considered by the Bank to be alternatives to public social security. The Bank’s preference for privately schemes and targeted systems, which are methods to define eligibility for programmes between the poor, not only “fail to cover the majority of the population but also fail to reach the people living in dire situations, [it] also prevents States from developing their own social protection systems,” noted a September report by civil society organisations (CSOs) Action Against Hunger, Development Pathways and Act Church of Sweden titled Can a leopard change it’s spots?.

Dr Laura Alfers, of global network Women in Informal Employment: Globalizing and Organising (WIEGO) commented: “We welcome the commitment by the World Bank to Universal Social Protection. As informal workers remain largely excluded from social protection, it is encouraging that efforts to extend coverage to the ‘missing majority’ are central to the World Bank’s new strategy. However, we disagree with the promotion of voluntary savings schemes, which are presented as central tools to expand coverage to informal workers, and as ‘alternatives’ rather than complements to public social security. Instead of simply dismissing public social insurance and potentially creating costly parallel structures, we call on the World Bank to support countries in adapting their social security systems to be more inclusive.”

‘Universal’ support, with a side of austerity

USP2030 defines USP as “nationally defined system[s] of policies and programmes that provide equitable access to all people and protect them throughout their lives against poverty and risks to their livelihoods and well-being,” which can consist of “cash or in-kind benefits, contributory or non-contributory schemes, and programmes to enhance human capital, productive assets, and access to jobs…benefits/support for people of working age in case of maternity, disability, work injury or for those without jobs; and pensions for all older persons.” USP2030 also defines universal social protection as a human right.