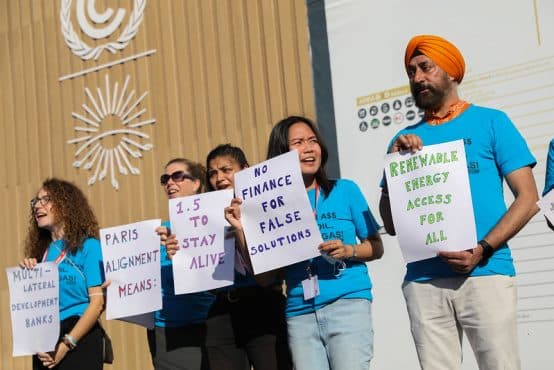 The World Bank’s approach to aligning with the Paris Agreement remains blanketed in uncertainty, after the Bank and other multilateral development banks (MDBs) gave a top-line update on their joint approach to Paris alignment at the United Nations Framework Convention on Climate Change’s (UNFCCC) 27th Conference of Parties (COP27) in Sharm El-Sheikh, Egypt, on 9 November.

The event provided new details on two tracts of the MDBs’ Paris alignment approach where little information has thus far been made public: The alignment of policy-based lending – or development policy financing [DPF], as it’s known at the World Bank (see Background, What is Development Policy Financing?) – and of lending via counterparties, or financial intermediaries, which constitutes about half of the portfolio of the International Finance Corporation (IFC), the Bank’s private investment arm.

Worryingly, major questions remain about both approaches. The presentation suggested policy reforms linked to DPF would be considered ‘aligned’ if they do not present “persistent barriers” to efforts to reduce greenhouse gas emissions – a principle which would seem to leave the door open for short-to-medium term support for carbon-intensive activities, despite the urgent need to reduce emissions. For financial intermediary lending, in cases where MDBs make equity investments, clients will be required to have a ‘credible decarbonisation plan’, but it remains to be seen how robust these will be. IFC’s Green Equity Approach currently only requires clients to divest from coal by 2030, and includes no restrictions on financing for oil and gas, per research by Netherlands-based civil society organisation Recourse (see Observer Winter 2020).

Is that called the International Bank for Reconstruction and Development only for the 20th century?Mia Mottley, Barbados Prime Minister

“The MDBs’ Paris Agreement alignment update…demonstrated that the process is too sluggish for the scale of change needed to stop catastrophic climate change,” said Fran Witt of Recourse, in a press release from the Big Shift Global coalition on 9 November. “It appears that for development policy finance and intermediated finance the process has hardly started to get off the ground.”

At a separate World Bank COP27 side event on 11 November, the Bank clarified that it would publish all aspects of its Paris alignment approach ahead of the 2023 World Bank Spring Meetings. The Bank is due to operationalise its approach from 1 July 2023, with the exception of 15 per cent of the portfolios of IFC and the Multilateral Investment Guarantee Agency (MIGA), the Bank’s insurance arm, deemed ‘hard to decarbonise’ (see Observer Summer 2021).

Despite the process being heralded by Bank staff as critical to the Bank’s efforts to ensure climate is mainstreamed across all its work (see Dispatch Annuals 2022), the Bank is yet to commit to holding a public consultation period on its Paris alignment approach.

The Bank’s slow progress on Paris alignment occurred alongside growing calls for it to evolve in order to address current global challenges.

In her address at COP27 on 7 November, Barbados Prime Minister Mia Mottley excoriated the Bank, asking “is that called the International Bank for Reconstruction and Development only for the 20th century?” The final decision text at COP27, meanwhile, called on “multilateral development banks to define a new vision and commensurate operational model…fit for the purpose of adequately addressing the global climate emergency, including deploying a full suite of instruments, from grants to guarantees…, taking into account debt burdens.”

The Bank and its embattled President, David Malpass – who has repeatedly denied he’s a climate denier after facing calls to resign when he refused to confirm that he accepted climate science at an event in September (see Dispatch Annuals 2022) – are due to respond to a request from World Bank shareholders, including G7 countries, for a draft ‘evolution roadmap’ before the end of the year, per reporting by Devex on 14 November. How the Bank will ramp up its climate work is expected to be a central focus of the roadmap, with the Bank’s Managing Director of Operations Axel van Trotsenburg strongly hinting at COP27 that this could include a request for a ‘green’ capital increase from shareholders, according to Reuters.